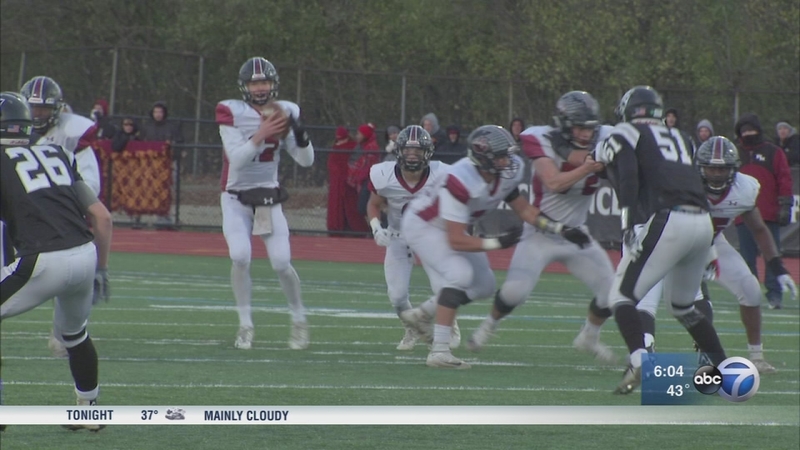 CHICAGO (WLS) -- A judge has denied Fenwick High School's appeal on Wednesday to overturn the decision of a high-stakes football game. Plainfield North High School is still the winner of Saturday night's semifinal game and will play in the Illinois State Class 7A Championship.

The comments on social media came quickly with many Fenwick supporters saying the ruling was unfair. In a statement IHSA administrators agreed. But they said there's nothing they can do about it. Plainfield North players were practicing Wednesday getting ready for the state championship while Fenwick's players are done for the year.

Disappointed Fenwick supporters left the courtroom Wednesday morning knowing they have suffered their second loss in less than a week. They first were robbed of a victory in their game Saturday by a referee's bad call. And Wednesday the judge refused to intercede.

"Fenwick of course is disappointed with the outcome. The Fenwick board and president will be apprised of the decision," Peter Groom, Fenwick principal, said.

On Saturday, moments after Fenwick's quarterback threw the ball away running out the clock on the game that would send them to the state championship game and players rushed onto the field to celebrate. But the celebration was short-lived. The referees called a penalty for intentional grounding. The game should have ended there. But the referees then made the mistake of allowing Plainfield North one more play. They used it to kick a game tying field goal and they later won the game in overtime.

The Illinois High School Association (IHSA) ruled that Fenwick should have won.

"It is tough for kids on both sides. Sports are important," Todd Faulkner, Plainfield attorney, said.

Fenwick attorneys argued in court "the reality of it is we won...this can be fixed. This isn't a situation where humpty dumpty can't be put back together."

Fenwick initially appealed to the IHSA. But they said the referee's decision, though it was wrong, it was final. Plainfield North was the winner.

"I don't feel like it's a win. It's tough on both sides. It's a tough decision to make," Craig Anderson, executive director of the IHSA, said.

Fenwick argued in court this was an extraordinary event. The school hasn't been to a state championship in 87 years. They compared it to the Cubs going to a World Series. But in the end they said they will accept the reality and wished Plainfield North luck on Saturday.
Officials at Plainfield North said they appreciated the court's decision and will do their best in Saturday's game.

READ THE FULL STATEMENT FROM THE IHSA ON WEDNESDAY'S RULING:

"Today's decision by the Honorable Kathleen G. Kennedy in the Circuit Court of Chicago to uphold the result of the IHSA Class 7A Semifinal Football game is not a victory. There is no celebration and there are no winners in this circumstance. It is simply a resolution.
The Fenwick High School community has been dealt a pair of devastating blows over the past few days, while Plainfield North had a historic moment shrouded in controversy simply for following the rules provided for them, first by the game officials, and then by the IHSA.

We will move forward now, in the short-term with eight state championship football games at the University of Illinois this weekend. In the long-run, it is our job as an Association, Board of Directors and membership to look at our policies and rules to see if and how we might be able to prevent instances like this in the future.

We appreciate Judge Kennedy's ruling from the perspective that we believe it is vital for membership organizations like the IHSA to be able to self-govern within the rules set by our member schools. Judge Kennedy recognized the historic precedent that would have resulted if she had overturned the outcome of the game based on an officiating error. This is the same pitfall our membership foresaw in originally approving the by-law, and that our Board of Directors recognized in their decision not to consider an appeal."