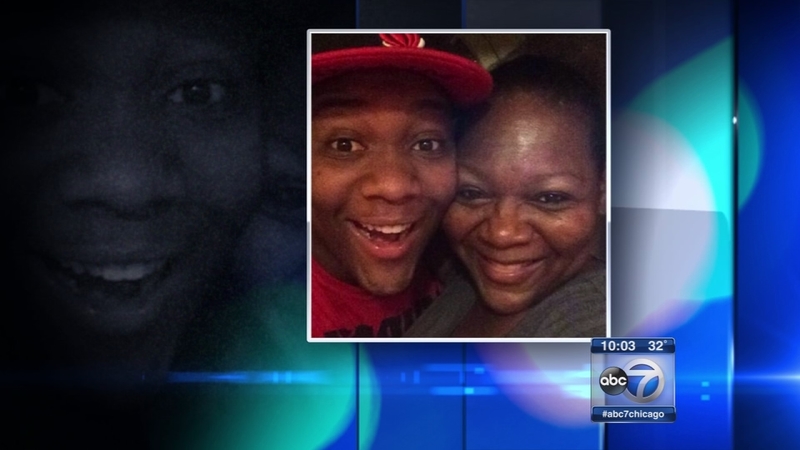 CHICAGO (WLS) -- A 22-year-old man was fatally shot early Friday near a police station on Chicago's Northwest Side.

The victim's mother, Shapearl Faulkner-Wells, identified him as Courtney Copeland.

"How many kids have to die?" she pleaded Friday night at a vigil remembering her son. "How many black children have to die in Chicago? This killing has to stop. No mother should feel what I feel."

Police say someone fired through the driver's side window of Copeland's burgundy BMW, hitting him in the back near Grand and Central. His family says doctors told them the bullet pierced his heart.

Police said around 1:15 a.m. Friday, Copeland was shot near the 25th District police station. He stopped at the intersection of West Grand and North Central avenues and got the attention of an officer parked in a squad car nearby, police said.

Copeland got out of his car to tell the officer he had been shot and fell to the ground.

The officer called for an ambulance. Copeland was rushed to Advocate Illinois Masonic Medical Center with a gunshot wound to the back. He died at the hospital.

"We know from the police statements that he was shot in the back and it went to his heart. I wanted to come out here and speak with the news today, basically to tell everyone that my son did not deserve what happened to him. We see the constant tragedies that are going on in the Chicagoland area all the time. I advocate for those mothers who have children who have passed away. My son, he was a good boy," Faulkner-Wells said.

Investigators are looking into what led to the shooting and whether or not Copeland was targeted. About a half an hour before the shooting, Copeland met up with coworkers outside Paisans Pizzeria in Cicero, where he was a regular. Just after midnight, he was headed to stay at a friend's house when he was shot.

"We are trying to find out why something like that would happen to him because he has no enemies," said stepfather Brent Wells.

Copeland's family said he was a good man who wanted to work hard and be successful for his family. Born in Cicero, he graduated from Chicago's Jones College Prep where he was a basketball star. He was well-loved and well-liked by many. Copeland worked for WorldVentures, a travel agency, and recently bought the BMW.

"He was my hero. He was the one that I looked up to and I wanted to aspire to. His whole goal was to take care of his family with this business. That's all he wanted to do, to move up in different ranks so that he could achieve a higher goal. If you look on his Facebook page, that's all he talks about - is being financially free and being able to provide for his family," Faulkner-Wells said.

Copeland leaves behind three younger sisters. His mother said she can't make sense of who would do this to her son - or why.

Chris Pineda was one of last people to see his friend alive.

"He brought out the best in me," Pineda said.

"He will never leave my side," said his friend Steven Otero. "I will live life, and I will keep his memory alive through me."