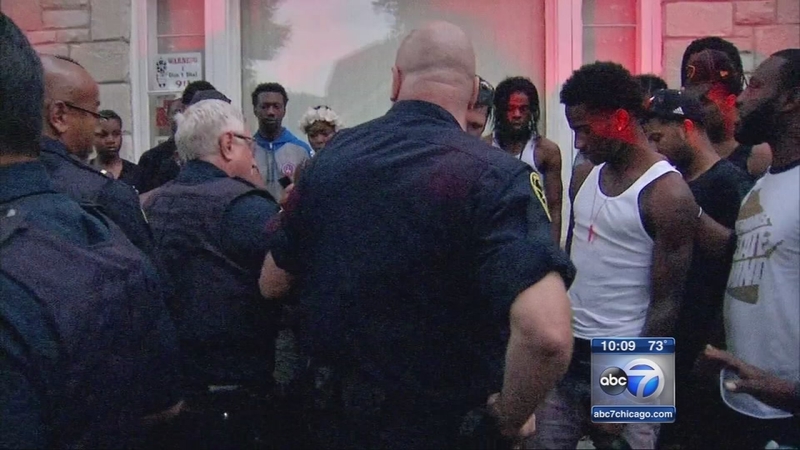 MILWAUKEE (WLS) -- Police in Milwaukee are strictly enforcing a 10 p.m. curfew for all residents under the age of 18 Monday night in hopes of quashing the violence that has surged after an armed man was shot by an officer on Saturday.

Smoke poured off the grill of a funeral fundraising cookout as the community let off steam until people spotted a man surrounded by police officers. Police wrestled the man to the ground and into handcuffs as he thrashed around with the crowd shouting on the entire time. Police held him against a cruiser before walking him away. They didn't explain way.

On Sunday police said 11 men and three women were arrested, all Milwaukee residents.

Officers used armored vehicles to rush an 18-year-old man who had been seriously wounded during the protest to a hospital.

Milwaukee Police Chief Edward Flynn said a group from Chicago called the Revolution Community Party traveled to Milwaukee specifically to incite violence and were the main cause of the disruption Sunday night beginning around 10:30 p.m.

To counteract any outside incitement and calm the violence, Milwaukee Mayor Tom Barrett imposed a 10 p.m. curfew is in effect for teenagers under the age of 18 during the week which will be strictly enforced.

"So, parents, after 10 o'clock your teenagers better be home or in a place where they're off the streets," Barrett said at a press conference.

The mayor said if there are more problems, the city may extend the curfew to all residents of the Milwaukee. The city is also closing Sherman Park at 6 p.m.; it will not reopen until 6 a.m.

Mayor Barrett said the outsiders are trying to damage a great neighborhood, where he lived for 11 years. Barrett also said he's concerned about the economic damage being done to the neighborhood.

More than 30 shots were fired Sunday night in Milwaukee's Sherman Park neighborhood, though the evening began calmly with a vigil at the spot of 23-year-old Sylville Smith's shooting by a police officer. On Monday, ATF officers were still collecting shell casings.

"We do have people who are recklessly firing guns, and clearly some are firing at the police," Flynn said.

Three Milwaukee police officers were injured Sunday night, police said. Two officers suffered glass fragments to their eyes after a rock was thrown through the windshield of their squad car. Another officer was injured in the right foot with a brick. Three squad cars were damaged, police said.

The Milwaukee County Sheriff's office said four deputies were injured Sunday. Sheriff's spokeswoman Fran McLaughlin said the deputies were hit by concrete or rocks and that two of them haven't returned to duty.

Some cars were damaged, but there was no repeat of the widespread destruction of property that occurred Saturday night. Chief Flynn credited religious and community leaders with helping to minimize the violence.

At a press conference Monday morning, Mayor Barrett said he has urged the state to release body camera footage of the shooting. Barrett said he had not seen the video, but saw a screengrab image from the video showing Smith with a gun.

Smith's death is under investigation by the state.

The Wisconsin National Guard was on call Sunday will be standing by on Monday.

DETAILS EMERGE ABOUT THE SHOOTING

Details about the shooting started to emerge Sunday afternoon, including that both Smith and the police officer who shot him are black, Milwaukee police said during a press conference.
Police said Smith, who they said had a lengthy arrest record, was armed and had run from a traffic stop before the shooting occurred Saturday night.

A still image pulled from the officer's body camera shows "without question" that Smith had a gun in his hand when he was shot, Mayor Barrett said. Police said the gun had been stolen in a March burglary in suburban Waukesha. Officials did not say if or when body camera video would be released to the public.


Police earlier said Smith fled from a traffic stop, noting that the car was "behaving suspiciously."

The 24-year-old officer who shot the man has been placed on administrative duty. The officer has been with the Milwaukee department six years, three as an officer.

Smith's sisters were emotional Sunday when talking about the injustice and their loss. Kimberly Neal, the victim's sister, said Smith did not have a gun on him.

"My brother was no felon, and even if he had a weapon he had every right to carry it," Neal said. She added, "He didn't have the gun on him. It was in the car."

Smith's father, Patrick Smith, said he blames himself for his son's actions.

"I just got out of jail probably two months, but I have been going back and forth in jail and they see these things and I'm like apologizing to my kids because this is the role model they look up to," Smith said.

Wisconsin Gov. Scott Walker activated his state's National Guard on Sunday to help police in Milwaukee if violent protests persist following the fatal shooting of a man by officers who said he was fleeing a traffic stop.

The protests happened on the city's predominantly black north side. Alderman Khalif Rainey - who represents the district - called the violence a warning sign from black residents "tired of living under this oppression." Nearly 40 percent of Milwaukee's 600,000 residents are black, and heavily concentrated on the north side.

Walker said he took the step after receiving a request from Milwaukee County Sheriff David Clarke and talking with Mayor Barrett and the Guard's leader. His announcement said the Guard will be in position to help "upon request."
Walker praised citizens who showed up Sunday to clean up the north side neighborhood where the violence took place. He called for "continued peace and prayer."

The anger at shootings by Milwaukee police is not new, and comes as tension between black communities and law enforcement has ramped up across the nation, resulting in protests and the recent killings of officers in Baton Rouge, Louisiana, and Dallas.

Milwaukee was beset by protests and calls for police reform after an officer fatally shot Dontre Hamilton, a mentally ill black man, in 2014. In December, the Justice Department announced it would work with Milwaukee police on reforms. Chief Ed Flynn had asked for what's known as a collaborative reform process after the federal government said it wouldn't pursue criminal civil rights charges against the officer.

Critics said the department should have submitted to a review of its patterns and practices, as was conducted in Ferguson, Missouri, after the fatal shooting of 18-year-old Michael Brown, who was black, by a white police officer in 2014.