WABC
QUEENS, N.Y. -- A plane from Atlanta skidded off a runway at LaGuardia Airport while landing Thursday, crashing through a chain-link fence and sending passengers sliding down an inflated chute to safety on the snowy pavement.


Flight 1086 to LaGuardia, scheduled to land at 11 a.m., skidded off the left side of runway 13 while landing, apparently losing its right wing. A spokesman with the Port Authority of New York and New Jersey said the plane was apparently leaking fuel when it landed. Officials are now checking for a fuel leak. 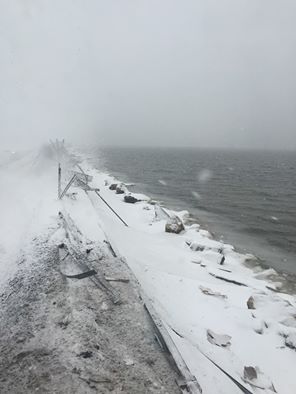 A conversation with passenger Jared Faellaci:


The Port Authority Police Crash, Fire, Rescue Unit handled the response and the evacuation of the passengers.

The Delta flight, a MD-88 aircraft, was landing on LaGuardia's main runway - a stretch of pavement that is 7,003 feet long and 150 feet wide. On the right side of the runway are a taxiway and the airport terminals. On the left is a berm, fence and then the waters of Flushing Bay.

The pics are deceptive. That is side of runway. We were going in water until hit the hill and spun. #crashland

Images show the plane resting in the snow and passengers trudging in a line after climbing off the plane. Delta said the passengers deplaned down inflated aircraft slides before being bused to a terminal.

"Customers deplaned via aircraft slides and have moved to the terminal on buses. Our priority is ensuring our customers and crew members are safe. Delta will work with all authorities and stakeholders to look into what happened in this incident," Delta said in a statement.

Delta said that the airline will work with authorities to figure out what caused the crash. Multiple emergency rescue crews are on the scene, and the National Transportation Safety Board will send an investigator to secure the recorders and document the airplane and damage, according to the Port Authority.

SEE VIDEO OF THE EVACUATION.

A conversation between Air Traffic Control and first responders was captured apparently just after the crash of 1086. None of these voices is the pilot of 1086. Air Traffic Control is giving the commands to go around. Other planes in the area at the time were told to stay in the air. The audio is courtesy of LiveATC.net.

Due to the crash, all runways at LaGuardia were closed around 11:15 a.m. One is expected to reopen at 2 p.m.; the rest are scheduled to reopen around 7 p.m., according to Fly.FAA.GOV site. Port Authority said closing runways is standard procedures after such incidents.

Airlines are canceling the rest of their day's flights to LaGuardia; according to FlightAware, there were up to 426 cancellations Thursday.

RAW VIDEO: Eyewitness News reporter Stacey Sager was at the scene as passengers were being treated by emergency personnel.

When Donnell got off the plane, he posted a picture he took of the scene, captioning it, "Look at this s**t! Knew I shoulda stayed my a** at home."

He later released a statement saying, "I'm blessed to be safe and sound after our plane skidded off the runway at LaGuardia airport today. I feel fine physically and hopefully all the other passengers did not have any significant injuries. We were all shocked and alarmed when the plane started to skid, but most importantly, as far as I know ,all of the passengers and flight crew were able to exit the plane safely."

In 2005, a safety buffer was added to the end of the runway at LaGuardia, according to the Federal Aviation Administration. It was updated just last year. Called an engineered material arresting system, the buffer is typically a crushable material that can extend 1,000 feet beyond the runway. It is designed to slow or stop a plane that overruns, undershoots or veers off the side of the runway.

The tires of the aircraft sink into the lightweight material and the aircraft is slowed as it rolls through the material.

In the case of Flight 1086, it appears that the jet didn't end in the buffer zone but instead veered off the runway and into the berm separating the airport from Flushing Bay.

LaGuardia is one of the nation's most-congested airports. It's also one of the more difficult ones to land at due to its close proximity to three other busy airports. When rain or snow reduces visibility, the number of landings slows down. The same occurs during high winds.

The airport has had its share of planes mishaps. In July 2013, the front landing gear of a Southwest Airlines flight arriving at the airport collapsed right after the plane touched down on the runway, sending the aircraft skidding before it came to a halt. Ten passengers had minor injuries. Federal investigators found that the jet touched down on its front nose wheel before the sturdier main landing gear in back touched down.

The last deadly crash at LaGuardia happened March 23, 1992, when a US Airways jet carrying 51 people crashed while trying to take off in a snowstorm. The plane skidded part way into the frigid waters of Flushing Bay and 27 people died.