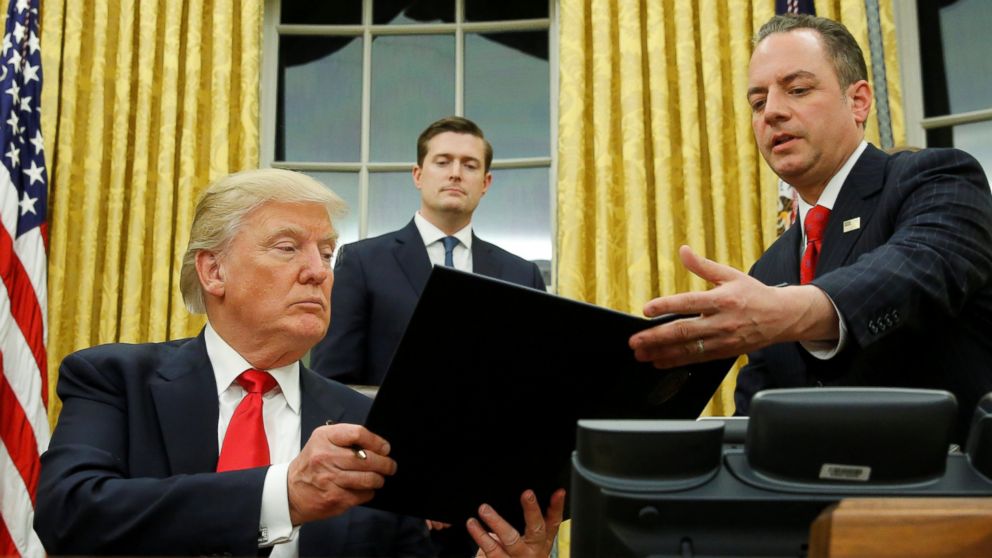 Sitting at the Resolute Desk in the Oval Office for the first time, President Donald Trump signed an executive order "minimizing the economic burden" of Obamacare, and signed commissions for Secretary of Defense James Mattis and Secretary for Homeland Security John Kelly.

It was a moment Trump promised his supporters during the 2016 campaign--he vowed that on day one of his administration he would "ask Congress to immediately deliver a full repeal of Obamacare."

The order says that until the Affordable Care Act is repealed, the executive branch must take actions to "minimize the unwarranted and regulatory burdens of the Act, and prepare to afford the States more flexibility and control to create a more free and open healthcare market."

The order also calls for the leaders of all federal agencies to prevent any Obamacare actions that would cause any regulatory or fiscal burden. New White House Press Secretary Sean Spicer did not offer details on exactly how this new order would be carried out when questioned by reporters this evening.

"Chief of Staff Reince Preibus will send out a memo to all agencies and departments that will ask them to abide by a regulatory freeze going forward until further notified," Spicer said of the executive order.

The Affordable Care Act was a signature piece of legislation for the Obama administration. But repealing Obama's landmark bill was a cornerstone of the 2016 Republican platform. Out on the trail, Trump called Obamacare "a disaster."

Republican leaders in Congress have gone back and forth on timeline-and procedure-for repealing and replacing Obamacare, attempting to quell constituent fears they could lose their health insurance if changes are enacted.

During an appearance on "This Week," Pence told ABC's Martha Raddatz, "Any American who has insurance today, through an 'Obamacare' exchange or through the Obama plan itself, should have no anxiety about losing their insurance."

It was a message reiterated during the contentious hearing for Trump's pick for Secretary of Health and Human Services, Rep. Tom Price, with Senate Health, Education, Labor and Pensions Committee. "Nobody is interested in pulling the rug out from under anybody," said Price.
Related topics:
abc newsnational
Copyright © 2021 ABC News Internet Ventures.
More Videos
From CNN Newsource affiliates
TOP STORIES