The Waiting Game: An ABC7 I-Team Investigation
WLS
By Chuck Goudie and Barb Markoff
CHICAGO (WLS) -- Investigations into universities accused of mishandling campus sexual assault cases can take years. It's something the government says it is trying to change, but victims say the delay is taking a toll.

The waiting game for one local student is going on two and a half years. She has missed semesters of school and says stress caused by her assault, and how the University of Chicago handled it, has been devastating. She is still waiting for the government to make a decision on her case.

"It's been over two years and it was supposed to be 180 days," said Olivia Ortiz.

The Department of Education's Office for Civil Rights handles these complaints. Currently, 142 schools are under investigation including some in Illinois. In Washington, the I-Team talked with Catherine Lhamon, who heads the civil rights wing of the education department.

"We've seen just an incredible mushroom in the volume of complaints that have come to us in the area of sexual violence," Lhamon said.

Lhamon said she is working to reduce the amount of time it takes to complete campus sex investigations.

Ortiz said she hopes her case is decided before she graduates, but this summer she had a bigger concern.

"They informed me that I would have to reapply," Ortiz said.

After she was assaulted, Ortiz took several medical leaves from U of C to recover, but planned to return to classes this fall. In August, her attorney received a letter stating, "In light of her leave tally, there is no question that Ms. Ortiz will need to apply for readmission to the college."

"It was just really disappointing, not unsurprising. They eventually let me just submit my doctor's note, not forcing me to reapply," Ortiz said.

University of Chicago officials declined the I-Team's request for an on-camera interview, but pointed out the school's recent policy revisions, resource guide website and results of its climate survey from the spring. These key findings from the survey show more than half of the female undergrads who responded reported at least one instance of unwanted sexual experiences.

"Alcohol is such a big problem," said Dr. M. Susan Scanlon, a northwest suburban ob-gyn who wrote a book as a guide to help students prepare for difficult situations in college.

She said studies show the relationship between alcohol and sexual assault is alarming.

"A research study found that college women who binged on 4 to 6 drinks on one occasion, 25 percent of those women had a sexual assault in their first semester of college," Dr. Scanlon said.

Once a taboo topic, campus sexual assaults are now part of a national conversation.

"We are beginning to see now as a country wherein we say sexual violence is not a rite of passage," Lhamon said. "Instead, we are going to be a community that supports all of our students."

"It's really exciting to see these people come out of the woodwork and feel comfortable sharing their stories," Ortiz said.

Ortiz is back at the University of Chicago and began fall semester classes a week ago.

Results from a survey by the Association of American Universities say nearly one in four undergraduate women said they were a victim of sexual assault or misconduct. 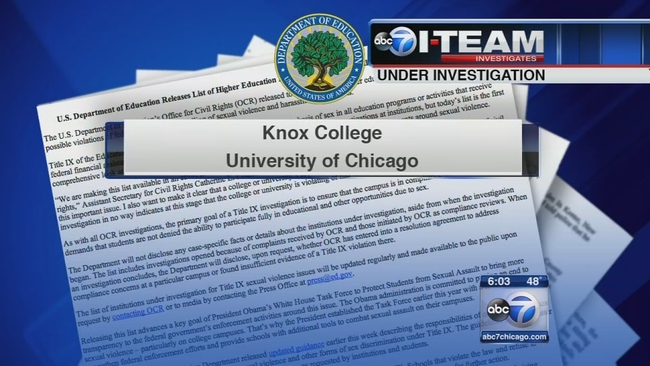