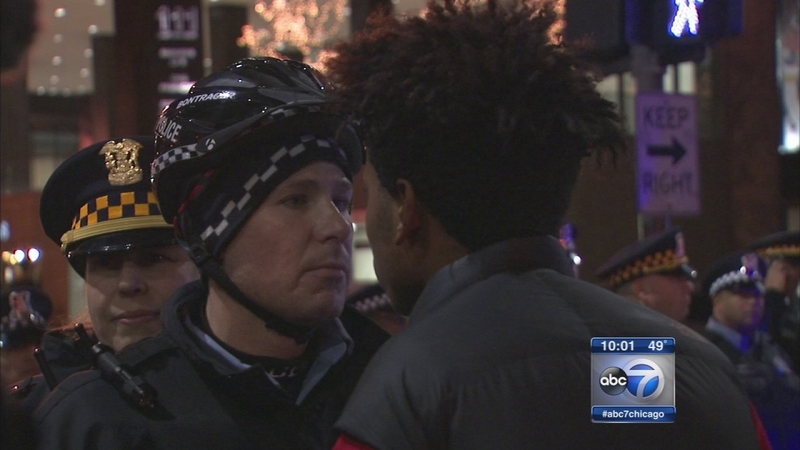 CHICAGO (WLS) -- One day after the release of the Laquan McDonald video, which shows a white officer shooting the African American teenager 16 times, community leaders continued to express anger and frustration while protesters took to the streets Wednesday night.

A group, which fluctuated between a couple dozen people to more than 100, moved throughout the Loop, River North and South Loop neighborhoods. The group blocked traffic briefly on Michigan Avenue near the Water Tower and then flooding into Millennium Park past police where some protesters pulled lights and decorations off the city's giant Christmas street. Two people were arrested attempting to march onto I-290. A few other were detained by police.

Organizers also want supporters to not shop on Black Friday.

"One of the most peaceful thing that we ask is for consumers to not shop that day," said Mark Carter, of One Chicago. "Through social media we are asking people to just stay home and not spend money." 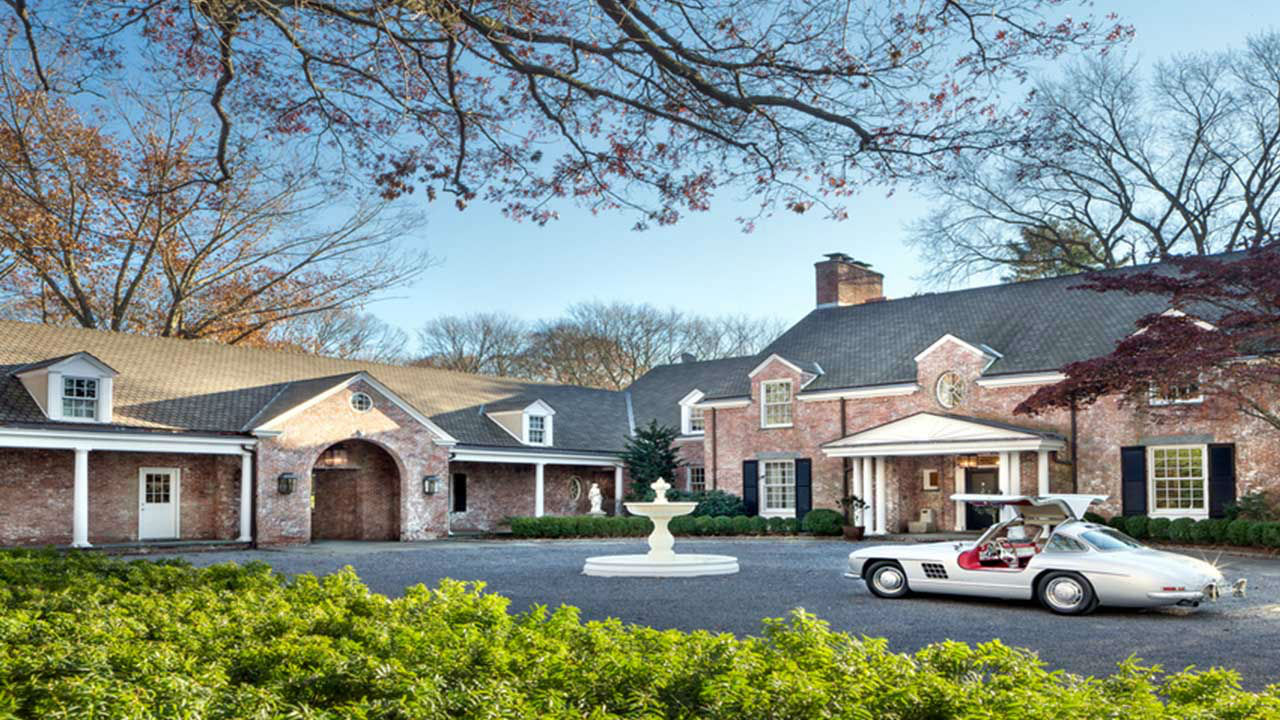 More than 300 protesters marched through the South Loop and Loop Tuesday night resulting in five arrests. Two of the protesters faced felony charges and appeared in bond court on Wednesday. Police reported no damage to private property.

Charges were dropped against Malcolm London, 22, who was charged with aggravated battery to a peace officer for allegedly punching a police officer Tuesday. He emerged from the Cook County Courthouse to cheers.

"Being in there tonight and standing in that jail cell with the people who come from where I come from ... only made me realize how much harder we have to fight to re-imagine how this place is," said London, a protest organizer with Black Youth Project.

The police union said London punched the officer, giving him a black eye. The officer did not sign off on dropping charges against London, said Dean Angelo, of the Fraternal Order of Police.

A 38-year-old California man, who had a Taser and a knife in his possession, was also charged, police said. Dean Vanriper, of the 35900-block of Wilcox in Murrieta, Calif., was charged with felony possession of a controlled substance, misdemeanor unlawful use of a weapon and misdemeanor possession of a deadly weapon. He is also due in bond court Wednesday.

Johnae Strong, 25; May Page, 26; and Troy Alim, 24; were each charged with resisting a police officer, a misdemeanor, police said. They were all released on recognizance bond.

Tuesday evening, hundreds of protesters with the Black Youth Project and Black Lives Matter marched in and around the Loop, shouting "16 times!" as they passed. Demonstrators also blocked the entrance to the District 1 police station.

Protesters said they are angry and frustrated by how they were treated Tuesday night, accusing police of aggressive actions.

"That video was so painful to watch. You can expect some people's reactions to be a little unexpected. But you have to understand it. Again, effective leadership is knowing how to direct and redirect it. That's what we need to be focusing on. Not violence," Brown said. 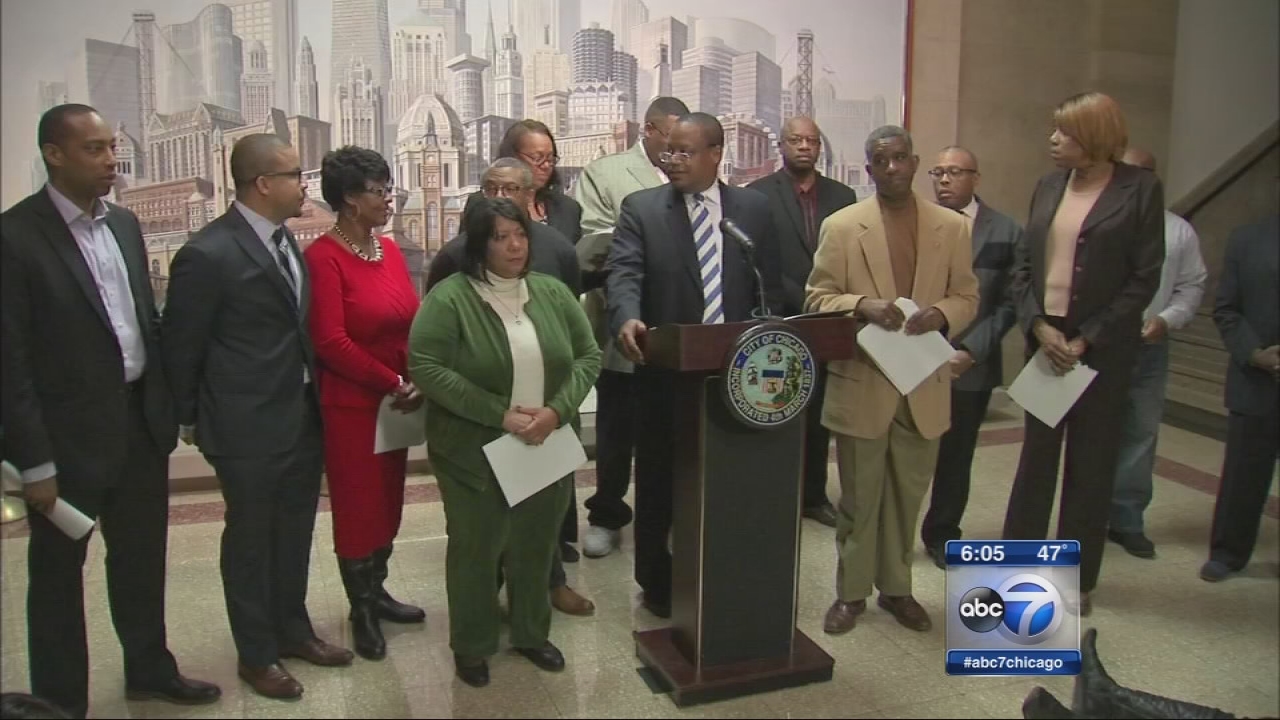 Black Caucus members frustrated
The Chicago Aldermanic Black Caucus expressed frustration after seeing the Laquan McDonald video, noting that they felt misled about the events that led to the teenager's death in October 2014.

Several aldermen and members of the Black Caucus held a news conference at City Hall Wednesday morning, saying that they feel frustrated because they were misled by city officials, who they said initially told them that the events leading up to McDonald's death was subject to interpretation.

"It should not have taken a full year to determine what happened when all the facts were known and there was a clear video to show it," said Ald. Howard Brookins, 21st Ward.

The group is seeking a no-confidence vote against Chicago Police Supt. Garry McCarthy.

"While we know the system has failed, no one can specifically say how," said Ald. Roderick Sawyer, 6th Ward. "You cannot change a system by ignoring a system."

McDonald's family issued a statement before the video was released, calling for calm.

"No one understands the anger more than us. But if you choose to speak out, wed the nearly seven-minute video, which shows the seconds-long interaction between Van Dyke and McDonald.

The video shows officers approaching the 17-year-old, who is walking briskly away from the police. He has a weapon in his right hand, which was later confirmed by Cook County State's Attorney Anita Alvarez to be a three-inch knife with its blade folded into the handle.

The video shows an officer with his gun drawn on the left. Alvarez confirmed that officer was Van Dyke. The teen veers in the opposite direction and is shot. He falls to the ground and another couple of puffs of smoke are seen coming from his body as he is shot a total of 16 times in 15 seconds. 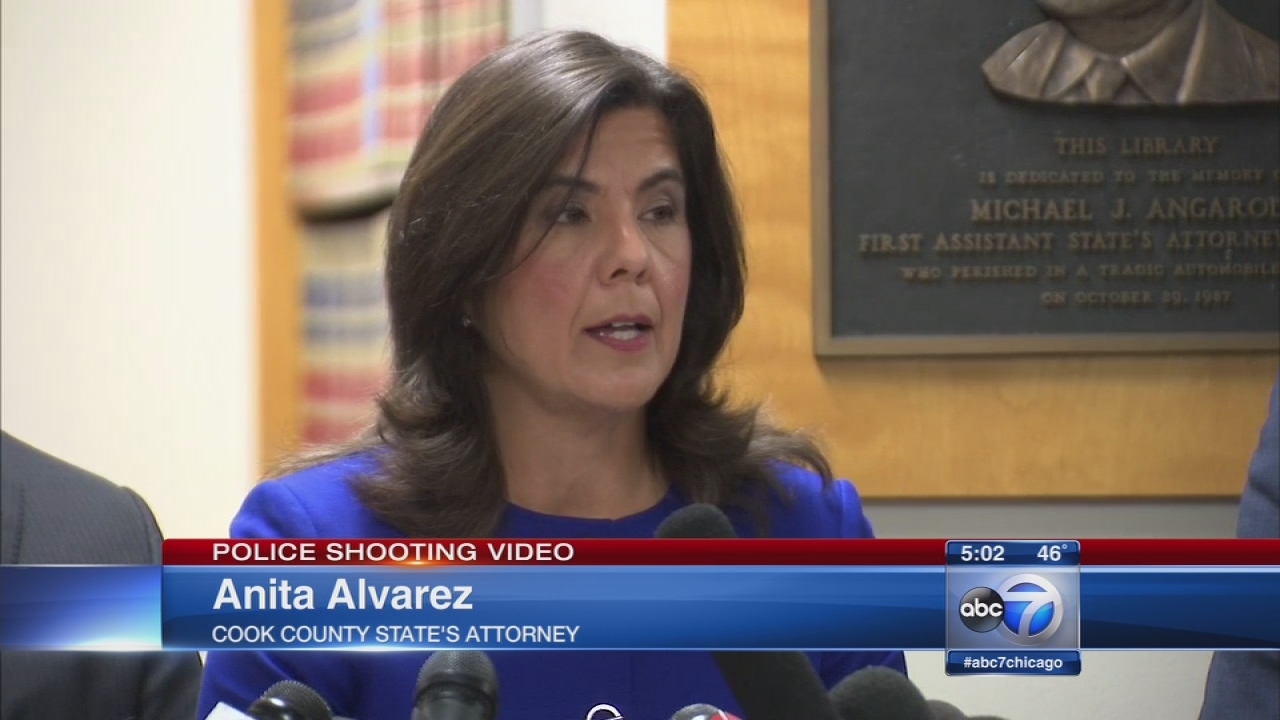 "It's unacceptable for it to take this long for the video to be released. And that's the question we have today. Did you bring up those charges because you're running for re-election?" said De'Andre Hawthorne, a community activist.

Protesters tried to push their way into Alvarez's office Tuesday evening, demanding she step down from her job. Members of her staff were unable to leave because of the commotion.

Terry Ekl, a civil rights attorney, said police shootings in Chicago can be more difficult because of the police union's contract with the city which gives police officers many rights when being investigated. Investigations are also complicated when there are multiple police witnesses because each one is given a union attorney.

However, legal experts note, the video made it clear that charges were warranted.

"At the end of the day, I'd rather take my time and get it right than rush to judgement and get it wrong," Alvarez said on Tuesday.

Wednesday, Alvarez released a statement that read, in part: "While I understand there may be questions or frustration about the length of time of the investigation, I want to assure citizens that my office took the necessary time that was required to conduct a thorough and comprehensive investigation and to gather all possible evidence in order to ensure that we have built the strongest case possible so that justice can be served for Laquan and his family."

The Rev. Jesse Jackson called for McCarthy's firing due to his handling of the case.

Jason Van Dyke, 37, is the first active Chicago police officer charged with murder for an on-the-job shooting in more than 30 years.

He's a husband and father of two grade-school children. He has been a police officer for 14 years.

Daniel Herbert, Van Dyke's attorney, spoke to the press on Tuesday before the video came out.

Van Dyke was part of a special operations unit for several years, despite at least 18 citizen complaints against him since 2006, according to a University of Chicago database.