WLS
By ABC7 Eyewitness News Terrell Brown
CHICAGO (WLS) -- An intense day of training for Chicago Fire Department first responders who were put through the paces on how to respond to a variety of life-threatening emergencies. 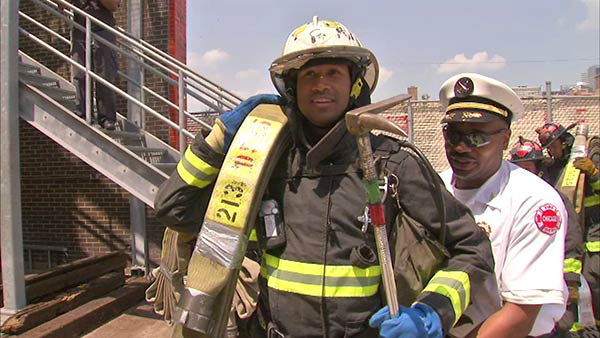 ABC7's Terrell Brown put through CFD training
ABC7's Terrell Brown joined first responders as they were put through the paces on how to respond to a variety of life-threatening emergencies.
The day began at the Chicago Fire Academy. Inside is a $2.2 million, EMS simulation center, the largest in the Midwest. Here first responders train for hundreds of emergency scenarios, such as a mass shooting or a cardiac arrest call that requires CPR.

My vitals were taken to see if I could handle the next task. I was fitted for gear and suited up. Then it was up a truck ladder five stories. It seemed simple enough, but as I got higher, the ladder started to move a whole lot when I got up to that point, swaying in the wind.

Once back down, it was back up, this time with an oxygen tank, tools and a hose, about 50 pounds of gear. That's about half of what a real fighter would carry.Going up the ladder and the stairs looks a whole lot easier than when you actually do it.

Next, the Jaws of Life, the fire department's primary tool for extrication.

With oxygen mask on, it was into a smoke-filled structure. There was zero visibility and the only way to navigate was on hands and knees.

"Once you carry that gear yourself and you put these boots on, the coats and the helmets, it's not easy," said Commissioner Jose Santiago. Chicago Fire Department.

Not everybody is cut out to be a firefighter.