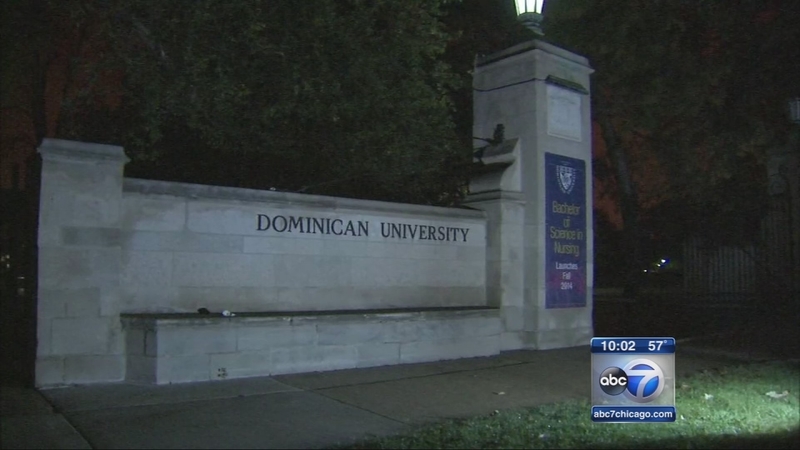 RIVER FOREST, Ill. (WLS) -- The victim of an alleged sexual assault on a west suburban college campus is sharing her story with ABC7 Eyewitness News.

The student says the attack happened Friday night at Dominican University in River Forest. A university spokesperson said they have identified the alleged attacker, who is not a student at the school. University officials have banned him from the campus while they continue their investigation.

The victim said she is speaking out because she is angry and she does not want this to happen to anyone else.

"These things happen to people and they don't do anything, they don't say anything," she said.

That is not the case with this 18-year-old college freshman, who did not want her identity known. She is doing something and saying something about a sexual assault that she says happened Friday night inside her dorm room at Dominican University.

"I didn't know this individual," she said. "I've seen him around campus once or twice from a distance."

She was introduced to him at a friend's birthday party. When her friends took off without telling her, the 22-year-old man offered to walk her back to her dorm room. Because she had been drinking, the student did not want to be alone with the man, so she asked him to leave.

She says she doesn't remember much of the incident, but she knew when she woke up something bad had happened.

"I woke up and I was wrapped in blanket and I didn't have any clothes on," she said.

She immediately contacted campus police, River Forest police and went to the hospital. She says a rape kit confirm evidence was found. This student says with the growing concern over campus rape, she was not about to suffer in silence.

"If you don't speak you will not get help. I do want to motivate those who have been in the situation, or who know people in this situation to step forward," she said. "Nothing will get done if nothing is said."

The victim said Dominican University has been cooperative and helpful. They plan on moving her to a different dorm.

Meanwhile, River Forest police are investigating, but so far no charges have been filed against the alleged attacker.