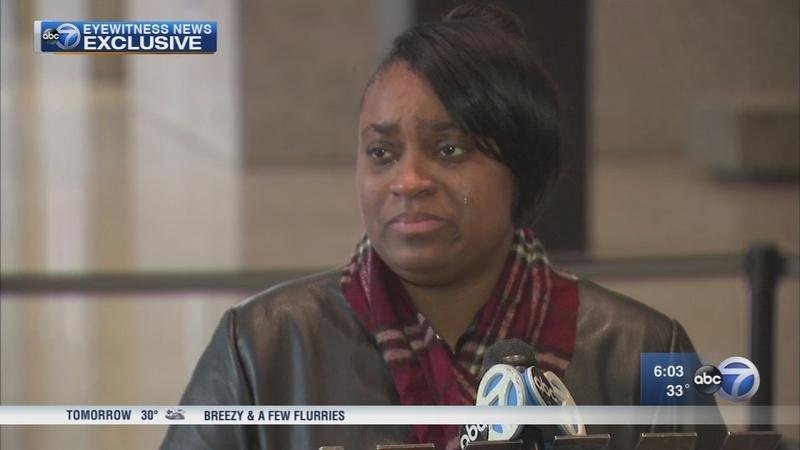 CHICAGO (WLS) -- Vandetta Redwood was found not guilty on both counts of a federal trial, who was charged with providing the weapon that killed 14-year-old Endia Martin.

The jury deliberated for about six hours before delivering their verdict. Redwood was visibly emotional as she left the building.

"I'm just tore up. That's it. I'm still stressed. It's real hard. You just don't know what I've been through," she said.

Martin was killed during a melee in the city's Back of the Yards neighborhood in April 2014. She was shot by another 14-year-old girl after federal prosecutors said Redwood handed the girl, her cousin, .38 special caliber revolver to the girl and said, "Shoot that b----." Another teen was also wounded.

Redwood initially told the police she wasn't at the shooting scene, but prosecutors in court presented cell phone video showing contact between Redwood and her cousin, the shooter. But the video did not show transfer of a weapon; instead, prosecutors had to rely on witness testimony to that effect.

"I want to tell the Martin family that I'm sorry for their loss, and-I'm sorry. And I hope they accept my apology," she said.

This was the second attempt to prosecute Redwood, who avoided criminal charges for the same deeds in in Cook County after the judge threw the charges out. A federal grand jury indicted her for putting the murder weapon in the hands of a child, and for carrying it within 1,000 feet of a school.

Donell Flora, cousin of both the shooter and Redwood, was convicted by a Cook County jury of the first degree murder of Martin and for the attempted murder of Lanekia Reynolds, the second teen who was wounded in the shooting. Flora was accused of first handing the gun to the alleged shooter. Federal prosecutors said they teen then handed it to Redwood before taking it back.

Redwood invoked her Fifth Amendment right not to testify during Flora's trial. Flora was sentenced to 100 years in prison.

The alleged shooter, who remains unidentified because she is a minor, was charged as a juvenile and is still awaiting trial.

The violence erupted after a feud over a boy between Reynolds and her rival escalated on Facebook. It snowballed into threats and the two eventually challenged each other to a fight.

The U.S. Marshals Service said after the trial that two attorneys allegedly violated U.S. Courthouse policy by taking photographs inside the courtroom.

"They are charged with a misdemeanor and they can have their day in court if they choose to contest the charge," the Marshals said in a statement.