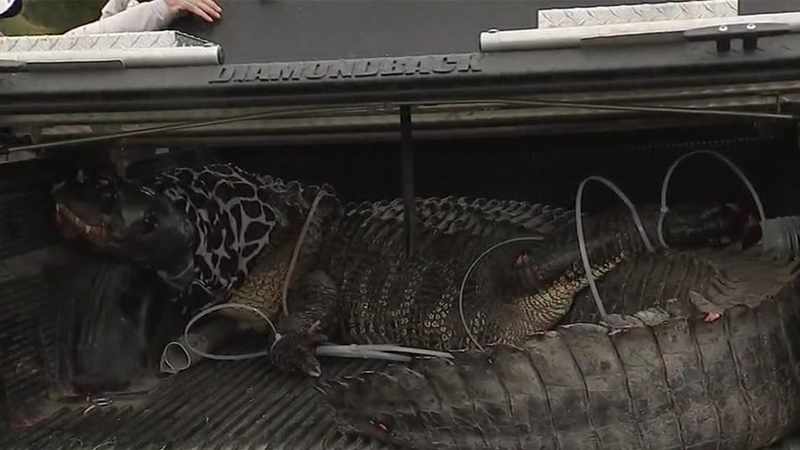 SUGAR LAND, TX -- A 12-foot alligator who surprised shoppers in Sugar Land over the weekend will soon be hanging out with his own kind.

The gator was released into an animal sanctuary in El Campo Monday. The gator will be put in a breeding program.

Wrangling the animal at the First Colony Commons Shopping Center proved quite the task for authorities. A Home Depot forklift had to be used to lift the gator onto the back of a truck.

"I try to be sweet to these guys," laughed alligator trapper Christy Krobroth. "He wasn't too sweet to me but I'll forgive him for that."

Krobroth works full-time as a dental hygienist. But she got licensed with Texas Parks and Wildlife as an alligator trapper.

"A lot of times when I show up on a call it's cops and mostly guys. And they're like, "Texas Parks and Wildlife sent you?' They kind of doubt me at first until I really get them taped and ready to go," Krobroth said.

"He'll probably just live out the rest of his life and have girlfriends and make babies and be fed every day. He'll be a happy gator," she said.

Krobroth tells us the animal got lost and ended up in the strip center parking lot.

Word of the animal spread on social media quickly. Here's one post from a woman who stumbled on the scene this morning outside of her salon: