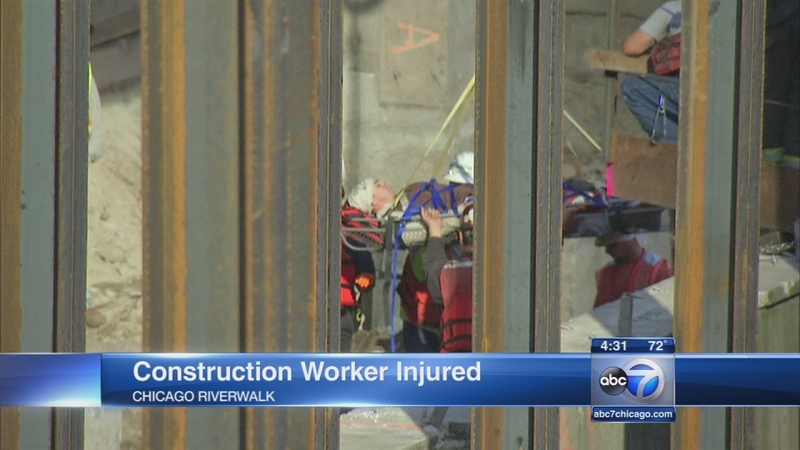 Worker lifted from barge by crane

CHICAGO (WLS) -- Emergency crews used a crane to lift an injured construction worker off a barge at the Chicago Riverwalk extension project at 8:40 a.m. Monday.

"They looked concerned. They were watching, just like a lot of the spectators up here," Alan Miree, commuter, said.

The man's legs were cut by two pieces of sheet metal when something happened with one of the steel beams, officials said, which were being delivered to the construction site. The injured worker was on the barge on the Chicago River near North LaSalle Street.

Firefighter placed him on a stretcher basket and then lifted him from the barge to an ambulance waiting on Upper Wacker Drive and taken to Northwestern Memorial Hospital, where he is being treated. He is expected to be OK.

"Up here, on the big metal line, was actually right next to him. I don't know if something happened to him when he tried to hook it on somewhere and he fell," Todd Kudrna, witness, said.

Walsh Construction, which owns the barge, could not be reached for comment.

Construction stopped for the day while federal safety investigators with OSHA interviewed workers. It's not the first time there's been a problem with the construction of the Chicago Riverwalk. In July 2014, crews had to tow a barge that sunk near the same area.

When this section is complete, the Chicago Riverwalk will go around the river bend from Lake Street to LaSalle Street. Officials have not said when work will resume.