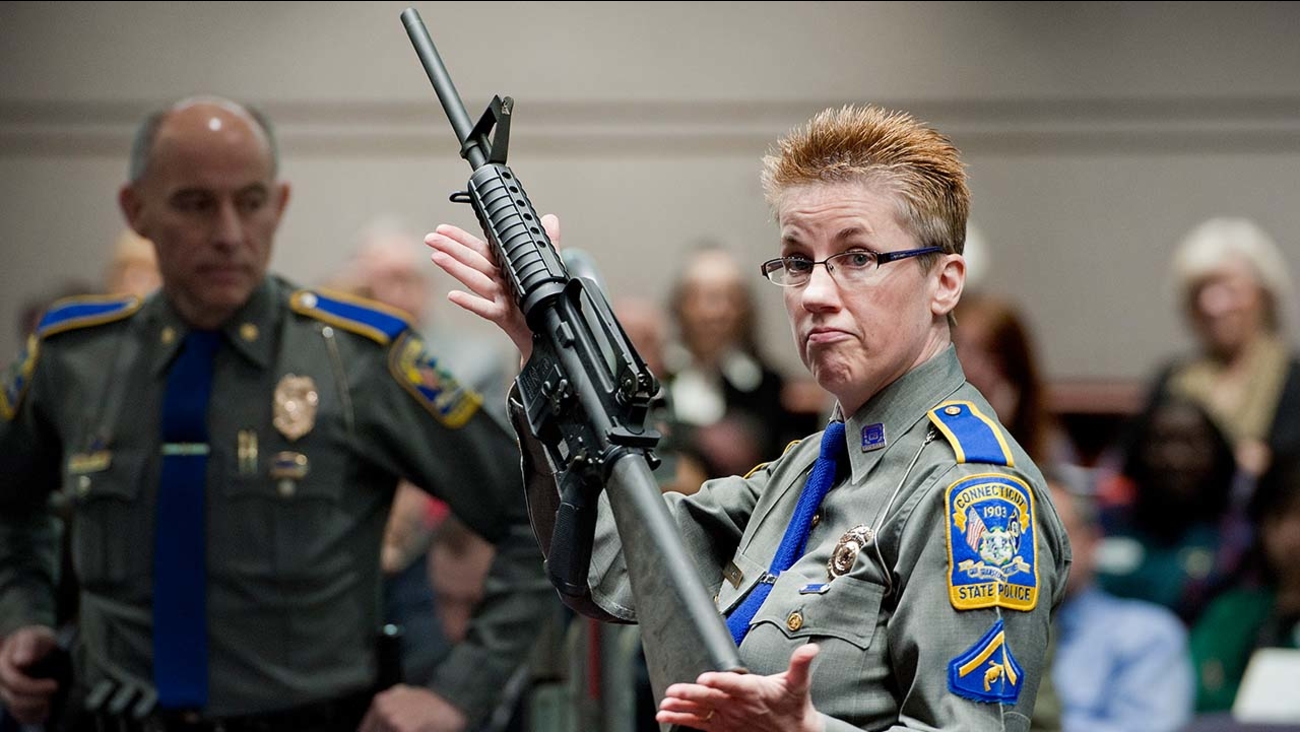 Detective Barbara J. Mattson, of the Connecticut State Police, holds up a Bushmaster AR-15 rifle, the same model of gun used by Adam Lanza in the Sandy Hook School shooting.

HARTFORD, Conn. -- The families of nine people killed in the Newtown school massacre filed a lawsuit against the maker and sellers of the Bushmaster AR-15 rifle used in the shooting, saying the gun should not have been sold for civilian use because of its overwhelming firepower.

The lawsuit alleging wrongful death and negligence was filed in state court and announced on Monday - the day after the second anniversary of the shooting, which left 20 children and six educators dead and became a rallying point for gun-control efforts.

In addition to Bushmaster, the defendants are Camfour, a firearm distributor, and Riverview Gun Sales, the now-closed East Windsor store where the gunman's mother purchased the Bushmaster rifle in 2010. Messages seeking comment from the defendants were not immediately returned.

"In order to continue profiting from the sale of AR-15s, defendants chose to disregard the unreasonable risks the rifle posed outside of specialized, highly regulated institutions like the armed forces and law enforcement," the plaintiffs wrote in the complaint.

The so-called AR-15 rifle was first built by Armalite for military use, but the design was later acquired by Colt, which in the early 1960s began marketing the semi-automatic AR-15 rifle as the civilian version of its fully automatic M-16.

Many other companies have since begun manufacturing and selling AR-15-type rifles. The weapons are popular in shooting competitions due to the light weight of the gun and ammunition and the weapon's accuracy.

Bill Sherlach, whose wife, Mary, was killed in the shooting, said he believes in the Second Amendment but also that the gun industry needs to be held to "standard business practices" when it comes to assuming the risk for producing, making and selling a product.

"These companies assume no responsibility for marketing and selling a product to the general population who are not trained to use it nor even understand the power of it," he said.

A 2005 law shields gun manufacturers from most lawsuits over criminal use of their products, but it does include an exception for cases where companies should know a weapon is likely to be used in a way that risks injury to others. A lawyer for the Newtown families, Katie Mesner-Hage, said the lawsuit appears to be the first of its kind against a manufacturer to claim that exception.

"I think it has the potential to have wide-ranging effect with respect to this particular gun," Mesner-Hage said of the AR-15.

Marc Bern, a New York City attorney, represents many victims of the 2012 mass shooting at a movie theater in Aurora, Colorado, where 12 people were killed and 70 injured. He said the 2005 law was a barrier to legal action for his clients, and he believes the Newtown families will have a difficult case to prove.

"There's no way that they can anticipate something like this can happen," Bern said about Bushmaster.

Nicole Hockley, the mother of 6-year-old Dylan, and Mark Barden, the father of 7-year-old Daniel, appeared at a news conference Monday morning with U.S. Sens. Richard Blumenthal and Chris Murphy. They declined to comment on the lawsuit as they pushed for new laws to restrict access to weapons and improve mental health treatment.

The Newtown gunman, Adam Lanza, shot and killed his mother, Nancy Lanza, on the morning of Dec. 14, 2012, before carrying out the rampage at the school. He committed suicide as police approached.

Story written by The Associated Press.