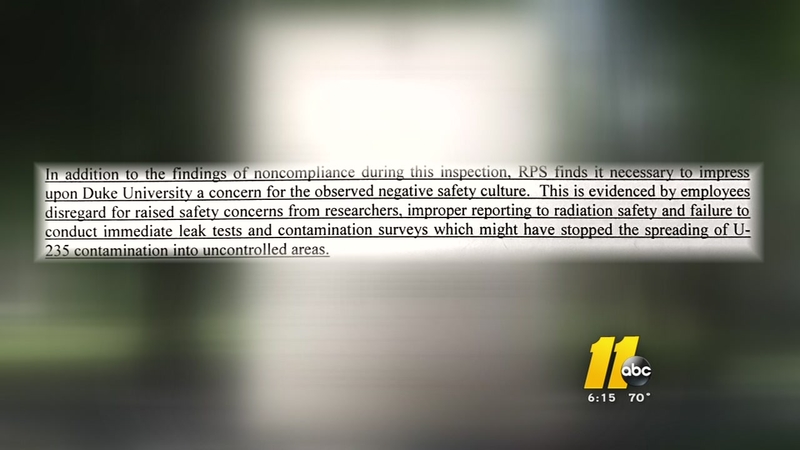 DURHAM, North Carolina -- State regulators slammed Duke University in a new report on a radioactive incident last month. According to the state report, in mid-February, researchers in the school's radiology department mishandled a sample of Uranium (U-235) without wearing gloves or other protective equipment and contaminated workspaces and other areas, on and off campus.

In the letter that accompanies the disciplinary findings, Health Physicist Travis Cartoski wrote "...disregard for raised safety concerns from researchers, improper reporting to radiation safety and failure to conduct immediate lead tests and contamination surveys which might have stopped the spreading of U-235 contamination into uncontrolled areas."

"Techniques utilized were suspected as inadequate (samples exposed to ESD, improper lighting, temperature control) to provide reliable results and further put into question the capabilities of the detector equipment," the report said.

Because of questionable samples and methods, the state urged the school to re-run all tests taken with the sample of Uranium.

"Many common radiation safety practices were not adhered to," the report states. Bad technique caused "several chances for cross contamination of the samples."

Researchers even drank beverages in a radiation-use area, increasing risk of contamination to include ingestion.

"Duke's own customized procedures tailored for this source, indicated that the source was to be tested for leakage every six months. Duke could not provide documentation that these leak tests took place and freely admitted that they were not conducting these tests for this source," the report said.

In the wake of the state's report, the school must follow a corrective action plan that includes shutting down high intensity gamma source (HIGS) operations within the Free Electron Laser Laboratory until March 27 (Duke must make improvements in that time), consideration of bringing a possible consultant on board, leak testing all sealed sources, and upgrading equipment and facilities.
The school has until March 27 to provide a written account of what happened to state inspectors. As of the filing of this report, no one from the school had commented to the ABC11 I-Team.

THE TIMELINE OF EVENTS:

- Friday 2/10: A sample of U-235 is moved from Triangle Universities Nuclear Laboratory (TUNL) to the Upstream Target Room (UTR) at the High Intensity Gamma-Ray Source facility.

- Saturday 2/11: A researcher bends the corners of the uranium chip to fit in a holder. The person is not wearing gloves or any other protective equipment. Hands and a work surface are contaminated. The researcher tells a colleague what happened but that person "dismissed" the concern and, instead of reporting it, took the sample to an area called "Physics" and tried to repair it. What that person didn't do was tell anyone. Not until the next day.

- Monday 2/13: The second researcher told a Radiation Safety Manager what happened and asked for testing. Nothing happened. The manager didn't notify anyone of the potentially dangerous breech.

- Tuesday 2/14: Another manager who had overheard the other two talking the day before told a Radiation Safety Officer what had happened. The report notes: "This notification should have come from any of the 5 researchers involved." Instead, it appears to have taken a whistle blower.

- Wednesday 2/15: Four days after the initial leak, the state begins its investigation.