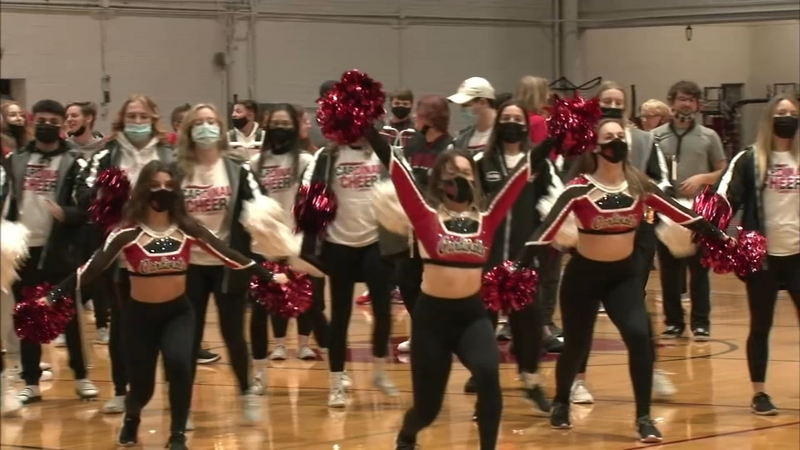 North Central College football players went through a final practice Tuesday before hitting the road to their last game of the season: defending their Division III national championship title.

The team won their championship in 2019, and with no season last year the players have an extra year of eligibility and an opportunity to win back-to-back titles.

North Central College held a pep rally for fans as they left Friday morning to be in Canton to cheer on the team. The North Central Marching Band, Cheer and Dance teams performed for the send-off.

It's a big moment for the group.

"We're really excited," said Sean Kelley, band director. "Anytime we get to spotlight North Central on a national scale, we're all really excited to do it."

The football team arrived earlier this week and now the rest of their support system is on their way and they are ready. And it is a lot of pressure.

"It's just so exciting to be here," said junior Claire Mikulcik. "The band has so much energy that it's just fun. They are all such wonderful, wonderful people. It's just a joy to be around so it doesn't feel like so much pressure because you have the support of everyone behind you."

The team won their championship in 2019, and with no season last year, this year is extra special.

"It still feels like the first time we're doing this, but it also feels so nice to be doing it again ,especially doing something at halftime, so it's another reason to be there. Doing that at the Hall of Fame stadium is going to be amazing," said junior Jack Armstrong.

Celebrations are not just happening at the school. The Downtown Naperville Alliance is hosting Cardinal watch parties at several Naperville bars and restaurants.