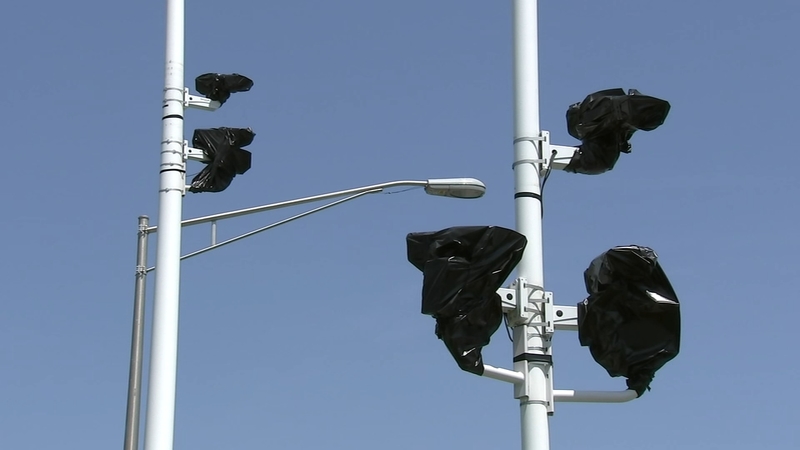 OAKBROOK TERRACE, Ill. (WLS) -- Plastic bags covered what were among the most controversial red light cameras in the state.

The lights are at Route 83 and 22nd Street, just across from the Oakbrook Mall. They are no longer in service, which means drivers will no longer be getting tickets from them in the mail.

One ticket shows photos of a car allegedly going through the red light, along with the $100 fee. Kyla Ohst got it two weeks ago, just before IDOT shut the cameras down.

IDOT revoked the operating permit for the cameras, claiming the Village of Oakbrook Terrace failed to submit mandatory reports documenting safety at the intersection. The agency made no mention, however, of federal charges against the former mayor of Oakbrook Terrace for allegedly accepting bribes from the company that installed the cameras. Activists maintain the cameras should never have been there in the first place.

"Statistics show before they put the cameras here, it was relatively safe and there has not been any change in terms of safety after they placed the cameras here. This was put here so they could generate a lot of money," said Mark Wallace of Citizens to Abolish Red Light Cameras.

Blake Jacobs got a $100 red light camera ticket there last summer even though he said he's pretty certain he broke no laws.

"I thought I caught the light and I got a ticket in the mail three weeks later," Jacobs said.

"A little justice for motorists and for the people of Oakbrook," Wallace said.

Former Oakbrook Terrace Mayor Tony Ragucci was indicted last month on charges of wire fraud and filing false tax returns. If convicted, he could face up to 20 years in prison. A trial date has not yet been set.

ABC7 has reached out to Oakbrook Terrace officials for comment.

IDOT issued a statement saying, "The Illinois Department of Transportation is committed to improving safety and continually works with our local government partners toward this shared goal. After review, the IDOT permit issued to Oakbrook Terrace to operate a red-light camera at Illinois 83 and 22nd Street is revoked due to failure to comply. Despite repeated requests, the city did not submit the post-installation analysis on the effectiveness of the camera system to improve safety at the intersection, as required by IDOT policy.

"The city has been instructed to deactivate the cameras immediately and apply within 15 days for the necessary permit to remove them.