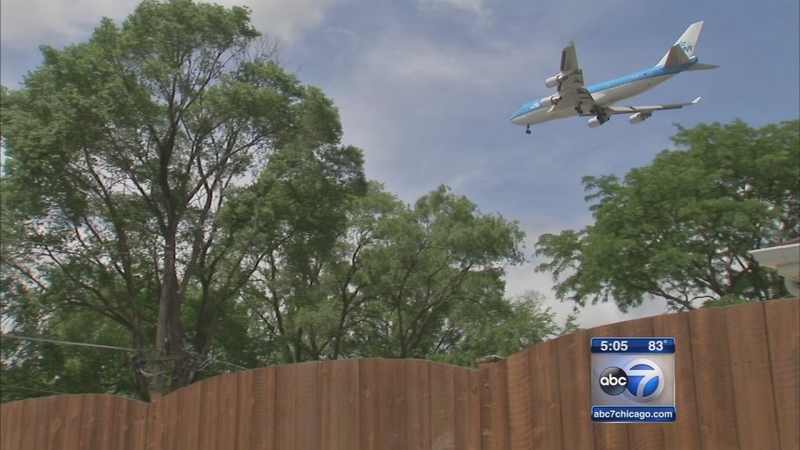 CHICAGO (WLS) -- Three Illinois democrats are calling on the Federal Aviation Administration to hold new public hearings as noise complaints from O'Hare are on the rise.

U.S. representatives Tammy Duckworth, Jan Schakowsky and Mike Quigley, whose districts fall under the airport's flight paths, want the agency to re-do its environmental impact study of the O'Hare modernization project. They claim that the previous FAA study failed to include neighborhoods and communities under the new runway's flight paths.

Suburban business owner Dick Anderson is among those who say the noise is just too much.

"We've lived here since 1961, and yeah there were planes," Anderson said. "We knew it when we bought the place, but it's never been like this."

Dick and Mae Anderson live in Schiller Park right under the approach to O'Hare's newest runway 28-10 center, which was commissioned last fall.

"Nobody said what was coming until all of a sudden, it was done, and they opened this runway, and here we are," Dick Anderson said.

Mark Ryan runs associated Fastening Products in Elk Grove on the northwest edge of O'Hare. He said there are days when he can't hear his customers on the phone, and office conversations have to cease because it's impossible to hear anything. His business sits below the approach to O'Hare's northern-most runway, opened five years ago as a bad weather reliever. But over the last nine months, it has been handling many more landings from the west.

Duckworth, Quigley and Schakowsky believe that FAA's hearings on O'Hare expansion nine years ago were designed to encounter the least resistance, offered inaccurate flight forecasts, and that "constituents were never informed in any meaningful way how many more additional flights and how much more noise they would be asked to endure."

They want the FAA to hold new hearings. But it's too late for Mark Ryan, as he's decided to move his company.

"We would not be able to conduct business here," Ryan said. "It's not a good fit for us any longer."