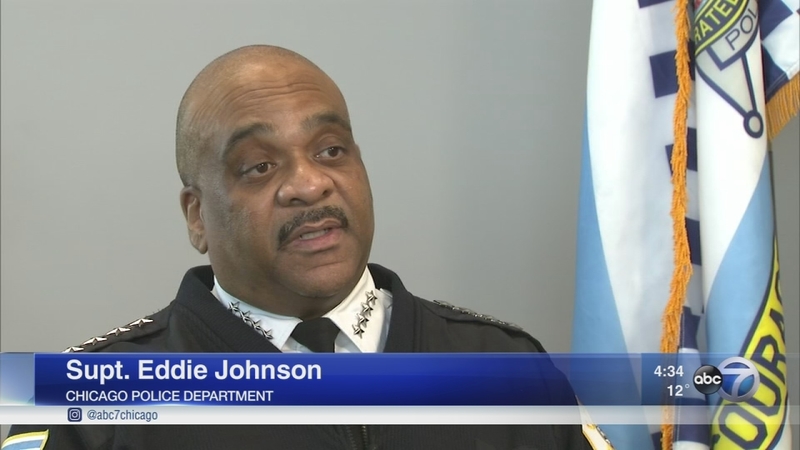 CHICAGO (WLS) -- As another very violent year in the city winds down, Chicago Police Superintendent Eddie Johnson is pointing to progress, while conceding the police department can do better.

He sat down with ABC7's Craig Wall to talk about what has worked and where the department will focus their efforts in the new year.

The superintendent concedes the homicides and shootings in 2017 are still far too high. But they have come down from the year before, which Johnson called horrible. Looking ahead, he vows the department will do better.

But in some typically violence plagued communities like Englewood, murders and shootings have dropped significantly. Part of that the Johnson attributes to successful community policing efforts which will be a priority next year.

In part 2 of the interview, Supt. Johnson talked about what has worked and where the department will focus their efforts in the new year.

"We have to make Chicago a safer place," said Johnson.

With nearly 650 murders so far this year Chicago is outpacing New York and Los Angeles combined. But Johnson says homicides are down about 15 percent from last year and shootings have dropped 21 percent.

"We're at, almost 120 murders down from last year and about 740 shootings, so with that in terms of raw numbers, we have over 850 families that don't have to suffer the trauma of gun violence," said Johnson.

Supt. Johnson said the department has made great strides in two of the historically most violent neighborhoods, Harrison and Englewood. He credits strategic initiatives and community policing efforts.

"Every bureau now is responsible for community engagement so that's the detectives, organized crime as well as the patrol division, so it's a department-wide philosophy," said Johnson. "[The] 7th district this year hosted a Halloween event and they had over 500 kids that attended Halloween, hosted by police officers in the Englewood District."

But Lori Lightfoot, President of the Chicago Police Board said more needs to be done, she points to the homicide clearance rate which she called woeful.

"The detective division has to do a better job, we cannot keep sending a signal to citizens, that killers can literally get away with murder and walk the streets with impunity," said Lightfoot.

But with the City Council approving multi-million dollar settlements for police misconduct this year, Lightfoot said that's been a setback for the department.

"The public is not going to have confidence that the police department is taking care of business, doing the right thing, turning the corner, whatever phrase you want to use, when they keep seeing a $31 million settlement, a $44 million settlement," said Chicago Police Board President Lori Lightfoot.

With the department under scrutiny for systemic problems of bias and officers protecting colleagues who cross the line, Wall asked the superintendent about reform efforts.

"Coming from where we were in this last year we've done a ton of reform efforts, so I personally would give us an 'A.' Can we do better, of course we can," said Johnson.

"I wouldn't give them an 'A,' in fact I'd give them an incomplete. And really there's a lot more work to be done to even give a grade," said Ed Yohnka, Communications Director with the ACLU of Illinois.

The ACLU's Ed Yohnka says the city and police department need a court enforced consent decree to really bring about the type of accountability that would amount to real reform. The superintendent said while people clamor for reform to happen more quickly he said he rather get it right the first time.

Johnson said the department has made strides in reform efforts with one example being body cameras providing more accountability for officers.

But he and others agree reducing violence is a community-wide effort that has to address poverty, which drives a lot of the violence.

"If we don't get at the root causes, it's just like playing whack-a-mole, the police department's going to be in a perpetual losing game, because we're not giving people hope," said Lightfoot.

Johnson said he plans to expand the community policing efforts in 2018 to include all departments and not just patrol.

When Johnson was asked if he had a goal for reducing homicides in 2018, he pointed out that homicides were down 15 percent this year. He said if they could reduce it another 15 percent next year that will be 30 percent down over two years, which he said would be good.
Report a correction or typo
Related topics:
chicagochicago shootingchicago crimeeddie johnsonchicago violencechicago police department
Copyright © 2021 WLS-TV. All Rights Reserved.
TOP STORIES
CPD elective time 'restricted' for foreseeable future: internal memo
When will mask mandate end? Chicago's top doctor weighs in
Heaviest pumpkin in US disqualified for crack
Dixmoor residents without water much of weekend after main break
Bali earthquake kills at least 3
DJ Khaled's CBD skincare pop-up staying longer in Chicago
Evidence of water vapor found on 1 of Jupiter moons: NASA
Show More
At least 18 shot, 2 fatally, in Chicago weekend violence: CPD
Make-A-Wish walk back in-person with over 500K wishes granted
Bill Clinton released from UCI Medical Center after blood infection
Woman, 82, dies after being hit by car in North Lawndale: CPD
SC teacher fired after student pulls weed gummies from prize box
More TOP STORIES News