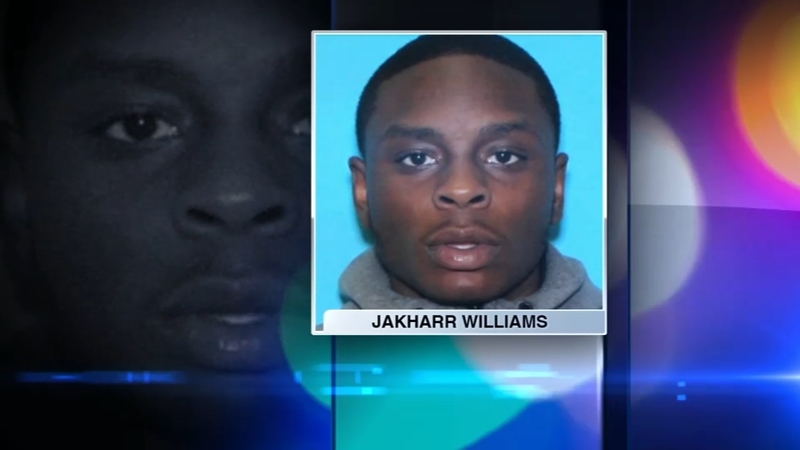 Police said 19-year-old Jakharr Williams of University Park is responsible for the shooting. Williams has an active parole warrant and a manhunt for him is underway.

The victim of the shooting has been identified to the Cook County Medical Examiner's Office as Javon Britten of Richton Park.

Police said Williams is considered armed and dangerous. Anyone with information on him is asked to contact Orland Park police at 708-349-4111 or email at crimetips@orlandpark.org.

"Those where his last words to me. He told me 'I love you, mom,' and I said, 'I love you too,'" his mother Nail Hobson said.

Police said Britten was shot in the chest and staggered a short distance before police said he collapsed in front of shoppers. He later died at a hospital.

Family members said Britten was at the mall with his cousin when they encountered someone they knew from Rich Central High School, where Javon was a student. They said that the gunman said something about not liking Javon.

"My other nephew Charles tried to diffuse the situation," said Stephanie Kizer, the victim's aunt.

But it escalated and the man who police have identified as Williams allegedly pulled a gun.

"He shot at Javon five times I believe, and two times at my other nephew Charles, but Charles was able to get away and get safe inside one of the stores in the mall," Kizer said.

Britten's family says they don't know of any bad history between the two men.

"I'm praying for both sides of the families and I ask for this young man with the help of God to surrender yourself," Kizer said.

Classmate's said Britten's tall and friendly demeanor was a welcome sight at school.

At Rich Central High buzz over Britten's death was palpable, and classmates said his tall and friendly demeanor was a welcome sight at the school. Rich Central offered counseling to students and staff Tuesday.

In a letter to the student body, Principal Todd Whitaker said, "While it is important to deal with grief, loss and anger and fear reactions, we believe it is essential to resume a normal routine during school activities."

Officers with heavy weapons responded within minutes, conducting a store-to-store search for the shooter. Officials said surveillance video shows the gunman left the mall on foot.

"Over our headset, we heard another associate yell, '9-1-1. There's a shooting in the mall.' So we ran to the back. We gathered up our customers and just stayed in the back," said Christina Pelc, who works at the mall.

An 18-year-old man was shot in the food court of Orland Square Mall and stumbled to the H&M store and collapsed.

Meanwhile, a second person was hit by gunfire, described as an innocent bystander who was grazed by a bullet in the leg.

"We believe this to be an isolated incident," said Deputy Chief Joseph Mitchell. "We believe, based on the information we have currently, currently, right now, it's an evolving investigation, the individuals knew each other."

FROM THE OFFICE OF THE MAYOR- JANUARY 22, 2019 pic.twitter.com/VOlOgrpM3H

No one was allowed to enter the mall after the shooting and police escorted shoppers and employees out of the building. Many sheltered in place in the back rooms of stores.

Without knowing exactly where the gunshots were coming from, people were desperate to get to safety. Outside, in freezing cold parking lots adjacent to the mall, panicked family members showed up trying to rescue their loved ones who'd been inside.

"They locked them down inside," said Rami Raheem, whose wife was in the mall's Forever 21 store when the shooting happened. "I was rushing, going crazy. In less than two minutes I was at the mall.

In a statement on Facebook, State Senator Elgie R. Sims Jr. said he was at the mall with his family and witnessed the shooting.

"I and the other parents tried to shield the children from the reality of what just occurred but after seeing the terror in their eyes these children will remember this day for years to come," Sims wrote.