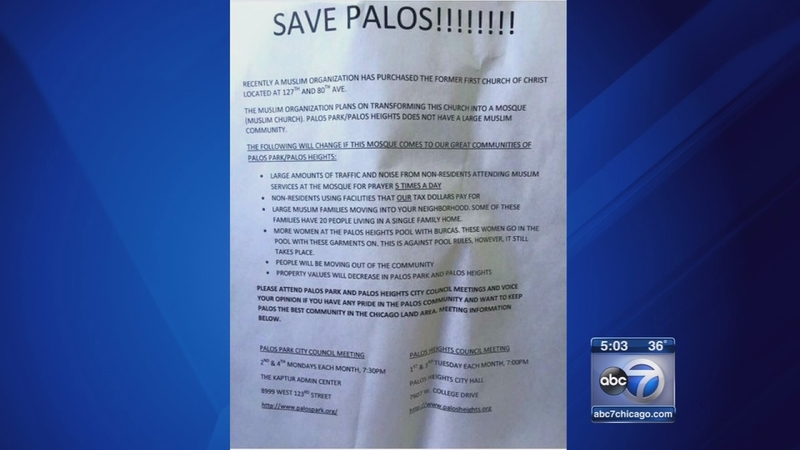 PALOS PARK, Ill. (WLS) -- There's opposition in the southwest suburbs to a plan to turn an old church into a mosque.

A flyer is being circulated against the proposal to open a mosque in Palos Park.

It sits back from the road, surrounded by trees. The church building has been zoned under a special-use permit as a house of worship for more than 50 years. But by this summer, it is expected to house a Muslim group who will reportedly use it for daily prayer sessions.

There is a growing Muslim population in the south and west suburbs. And they generally pray five times a day at a mosque.

"It was a religious institution to begin with," said journalist Ray Hanania.

But some residents apparently don't like the religion moving in. Someone has been anonymously putting flyers into area mailboxes containing warnings about the mosque, that it will bring "-Large amounts of traffic...Large Muslim families moving in.....Women wearing burkas..... People will move out.....property values will decrease."

Koldenhoven understands the controversy better than most. He was mayor of Palos Heights 15 years ago when he defended a Muslim group that wanted to open a mosque in the community. They eventually pulled out because of community opposition. The organization that owns the church property needs no permits nor permission from the village to operate a church. It's unclear how opponents could prevent it.