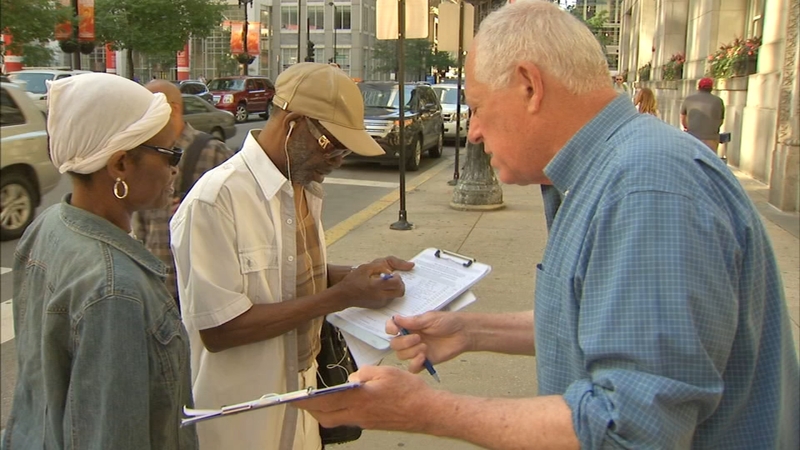 CHICAGO (WLS) -- Former Governor Pat Quinn said he will not be deterred by efforts to keep his mayoral term limit referendum off the November ballot.

On Monday, he accused Mayor Rahm Emanuel of working with aldermen to confuse voters about the issue.

What makes this referendum an issue in the mayor's race is this: if it would pass - and survive an expected challenge - it would effectively kick Rahm Emanuel off the ballot.

The mayor may be dismissing it, but Quinn is pressing on. Standing outside the entrance to City Hall, Pat Quinn was gathering petitions for a binding referendum that would set a two-term limit for Chicago's mayor - and in the process make Rahm Emanuel ineligible to run for a third term next March.

"I really feel it's unfortunate that Mayor Emanuel is so afraid, indeed terrified, of this referendum, he has his allies in the city council trying to scheme against it. Not very good," Quinn said.

Quinn, waiving a copy of the state constitution, insisted he would still be legally able to put the issue on the ballot of he can get the more than 52,000 signatures he needs.

He said he already has more than that, but wants to get as many more as possible in the next five weeks to withstand an expected challenge from the mayor.

During an event announcing a summer teen jobs program, the mayor would not answer questions about Quinn's efforts, but last week defended the other referenda.

"Former Governor has been at getting signatures for a while. He's not ready. These referendum are ready," Emanuel said.

Quinn noted that of the ten largest cities in the country, Chicago is the only one without term limits on the mayor. He said it's nothing personal against Mayor Emanuel.

"I think the principle is a very important one," Quinn said. "I think that two terms is enough, especially nowadays, in this age of big money."

Emanuel continues to build his campaign war chest - adding another $600,000, according to filings last week - bringing his total to nearly $12 million, far outpacing his rivals.