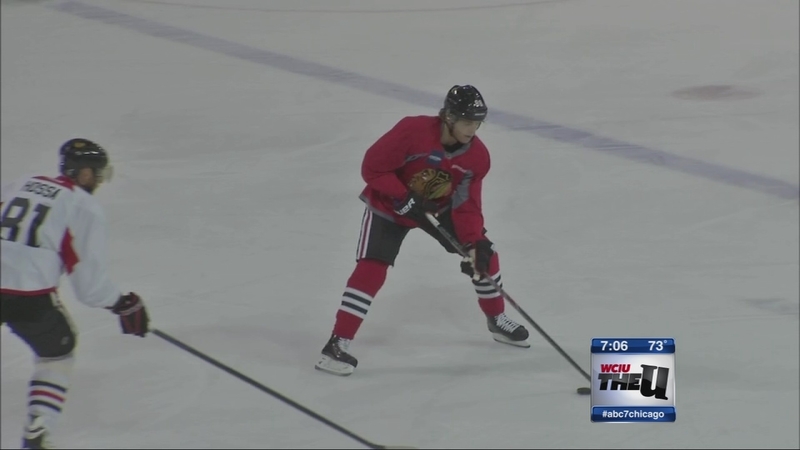 SOUTH BEND, Ind. -- Chicago Blackhawks player Patrick Kane took to the ice during training camp in South Bend, Indiana, on Friday. Kane is under investigation for a sexual assault at his home.

"It's good to get back on the ice after a while. I mean, I was a little rusty," Kane said.

The scrimmages, which are open to the public, have drawn a crowd of fans, many of whom are wearing his jersey.

"Oh, it's good to see him. And until we know any different, he's part of the Blackhawks and we enjoy him and want to support the team," Derrick Ramer, Blackhawks fan, said.

While fans focus on the game, a grand jury prepares to hear the sexual assault case against Kane, who is accused of raping a woman in August at his home near Buffalo, New York. He has not been charged.

"It's a little difficult especially because you admire a team so much. Kane is such an integral part of the 'Hawks," Angela Blake said.

"I'm obviously a big Blackhawks fan and Patrick Kane fan and I followed him his whole career. You just have to wait for the facts. And I hope for the best," Paul Ochs, fan, said.

On Thursday, he spoke about the rape allegations against him for the first time. He apologized for the distraction and said he has "done nothing wrong."

The Blackhawks are in South Bend through Sunday. On Monday, the team's training camp festival begins at the United Center. That event is sold out, according to the team's website.