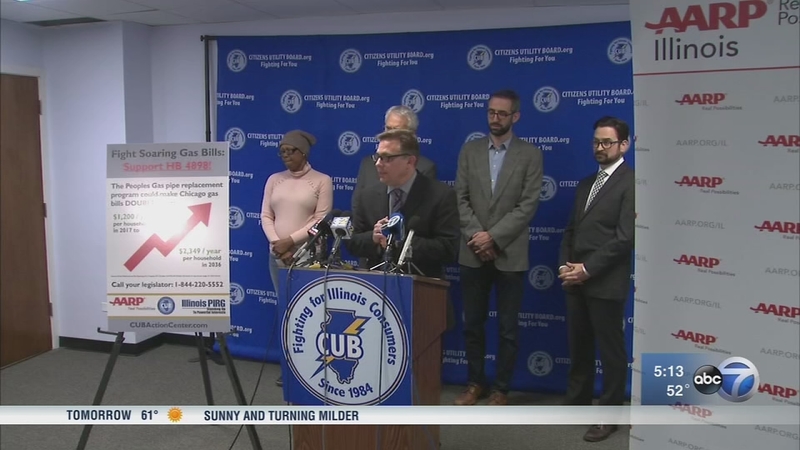 CHICAGO (WLS) -- Consumer advocates and a state representative said they will try to "rein in costs" of a massive Peoples Gas project.

South Side resident Sherry Henry said higher gas bills have put her in a bind.

"Like many families I fell behind in my Peoples Gas bill, owing $795. I have very little income," she said.

Henry, the Citizens Utility Board, Illinois PIRG, and AARP all say consumers are overpaying for a massive pipeline replacement project to replace 100-year-old pipes.

"Peoples Gas is spending too much money too fast while not accomplishing the fundamental goals of the pipe replacement program," said Abe Scarr, PIRG.

If passed, proposed state legislation would do away with a special section in your gas bill known as the rider, where costs of the project can be added onto your bill. Instead, advocates want a tougher state approval process.

"The blank check that Peoples Gas has been getting year after year to raise rates on consumers to pay for this project which has been incredibly costly," said Rep. Will Guzzardi (D-39) said.

Peoples Gas said it was surprised, because current legislation allowing that rider was passed overwhelmingly. The company said it "provides numerous safeguards such as built-in cost caps and thorough on-going regulatory reviews."

"Our plan continues to be the best approach to modernizing Chicago's aging natural gas delivery system," the company said, and added that bills may only increase 2 to 3 percent annually.

But the Illinois Attorney General said the total bill to the average residential heating customer will double in 15 years because of the spending.