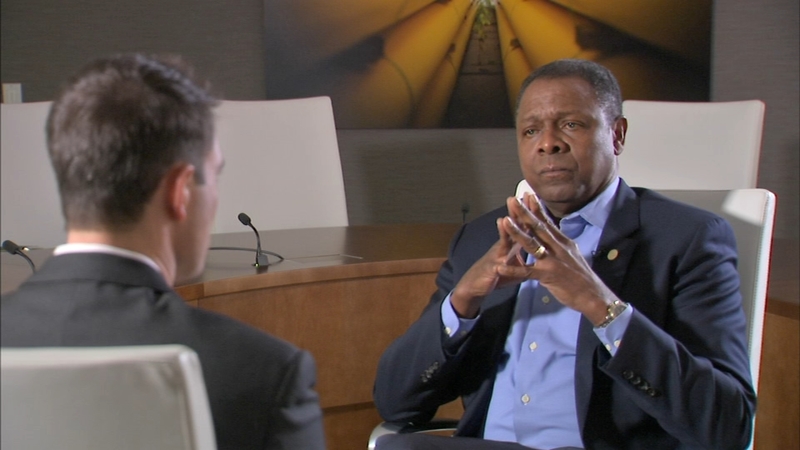 CHICAGO (WLS) -- Peoples Gas customers will be footing the bill for a big safety upgrade for decades to come, but there are critics who believe money is being wasted. The ABC 7 I Team spoke exclusively with the CEO of Peoples Gas.

Nearly $7 billion dollars of customers' money to fund the gas line replacement project was under scrutiny, and at one point under investigation by state leaders.

The CEO of Peoples Gas is firing back, saying not a dime is being wasted.

"It's about safety and reliability," said Charles Matthews, CEO of Peoples Gas. "It's about preventing an incident similar to the incident that happened in Boston."

Matthews says he's worried that similar old pipes here in Chicago could put the city at risk for leaks or explosions. The System Modernization Program will replace old pipes, which are more than a century old.

"We spend a lot of time maintaining them and monitoring them for leaks to make sure that the safety aspect is under control," said Andy Hesselback, Vice President of Construction for Peoples Gas.

Most agree the project using new, polyethylene plastic pipes is needed. However there have been years of controversy over the spending and what some consumer advocates have called a runaway budget.

"Do you think there would be less criticism about cost over runs if the projects would have started sooner?" Knowles asked Matthews.

"First of all there were not cost over runs," he responded.

"There were initially ..." Knowles began.

"There's never been any cost over runs, what has been characterized as a cost overrun is a change in a 20 and 30 year forecast that's not a cost overrun, that's a forecast," Matthews said.

Accusations of cost overruns started in November of 2015 when Peoples Gas was under different ownership.

Illinois Attorney General Lisa Madigan stated at that time, "The latest cost estimate is over $8 billion."

An independent auditor hired by the Illinois Commerce Commission claimed in a report that the estimated cost of the pipeline project ballooned from $2.5 billion to $8 billion. The projected cost is currently about $6.8 billion over the life of the project.

A little over a year ago, the ICC ended a two year investigation into spending and management of the program. A month later, the ICC approved a $4.7 million settlement, most of which goes back into the hands of consumers.

"What I feel and we needed to get the past behind us and allow this new management team to move forward and to do what needed to be done," Matthews told Knowles.

The settlement requires significant ICC oversight to prevent misspending and provides assistance to low income customers. But watchdog groups like the Citizens Utility Board and Illinois PIRG fear that some struggling consumers will still be left in the cold.

At a hearing in January of 2018, a Peoples Gas customer left in tears.

"Why is she crying? Because her bill is going up. She's got to either heat or eat," her friend told ABC 7.

"So you don't think the stand alone cost of the program alone on someone's bill would actually make them make that choice of heat or eat?" Knowles asked.

"Again, 2-3 percent per year over the life of the program," Matthews said. "That's probably what you're going to see with a loaf of bread. It's very similar to what we see in the consumer price index this is the growth that typically most products in society are going at today."

Peoples says bills will go up about 2-3 percent a year, but in 2017 Illinois Attorney General Lisa Madigan said bills could double in the next 14 years.

Matthews also says the project includes new meters being put outside of homes and the complicated cost of tearing up ground in the Loop, then rehabbing it.

"What do you say to a skeptical customer who says the cost is just too high?" asked Knowles. Matthews answered, "I will say to them one, there is ample oversight to ensure that every dollar we spend is being spent prudently. Secondly, I will assure them that when this program is done they will have the safest most reliable system at the lowest cost possible."

There's also current proposed legislation which would stop Peoples Gas from imposing a separate charge on customer bills. Experts say Peoples Gas could have to request money through a rate hike to be approved by state regulators. But Mathews said there is already oversight and regulation through the ICC. Peoples Gas could continue to face more ICC fines if misspending is found.