KGO
By Kate Larsen
NAPA, Calif. -- PG&E has agreed to pay $1-billion in settlement money for damages from fires sparked by their equipment.

The money is not going to the homeowners and individuals affected by the fires. PG&E has not yet settled any claims from the thousands of individual fire victims.

The settlement is being spread among the local governments of 14 Northern California towns, counties and agencies, that were affected by the 2018 Camp Fire, the 2017 Northern California wildfires - including the North Bay fires, and the 2015 Butte Fire.

In May, state investigators found PG&E responsible for starting the 2018 Camp Fire-- the deadliest and most destructive wildfire in California history.

Of the $1-billion settlement, $580-million of it will go to agencies affected by the Camp Fire including the town of Paradise.

The utility's equipment was also blamed for fires that devastated the wine country in 2017. $415-million of the settlement will be divvied up among nine agencies in the wine country-- including Napa and Sonoma Counties and the City of Santa Rosa.

Sonoma County Supervisor David Rabbitt has a list of items he hopes the settlement will cover.

"We have a tremendous amount of road damage, infrastructure damage that we need to still repair from the fires. We have programs that we'd like to do, to make sure we're more resilient going forward. This settlement will allow us to do that."

The remaining $5-million will go to the Calaveras County Water District for the 2015 Butte Fire.

The settlement was reached after months of negotiating. Attorney Scott Summy helped hammer out the deal.

"The money is contingent upon PG&E getting through the bankruptcy process. So this settlement agreement will be part of the plan that they file, and then if the judge approves it, then they will pay the public entities the money. I don't know how long that's going to take, we're hopeful the plan can be approved next year."

Mark Toney, executive director of TURN, The Utility Reform Network, is worried that PG&E customers will end up paying the billion dollar bill.

ABC7 reached out to PG&E to ask who was going to pay the settlement: shareholders or ratepayers, and they have not yet responded to the inquiry.

PG&E's full statement:
We remain focused on supporting our customers and communities impacted by wildfires and helping them recover and rebuild. This is an important first step toward an orderly, fair and expeditious resolution of wildfire claims and a demonstration of our willingness to work collaboratively with stakeholders to achieve mutually acceptable resolutions. We hope to continue making progress with other stakeholders.

PG&E has reached agreements with local public entities impacted by the 2015 Butte Fire, 2017 Northern California wildfires and the 2018 Camp Fire to resolve their wildfire claims under a Plan of Reorganization (POR) to be filed by PG&E. Per the agreements, in full settlement and satisfaction of such claims, $1 billion in cash will be paid as part of PG&E's POR, which is subject to Bankruptcy Court confirmation and the occurrence of the effective date of the POR.

Our goal throughout the Chapter 11 process is to work collaboratively to fairly balance the interests of our many stakeholders, as well as the customers and communities we serve, as we work toward a timely resolution of our case, while continuing to provide the safe and reliable natural gas and electric service that our customers expect and deserve.
Report a correction or typo
Related topics:
napapg&efiredisaster reliefdisasterlawsuitwildfirenorth bay fires
Copyright © 2020 KGO-TV. All Rights Reserved.
NORTH BAY FIRES

California's worst wildfires: How were they started? 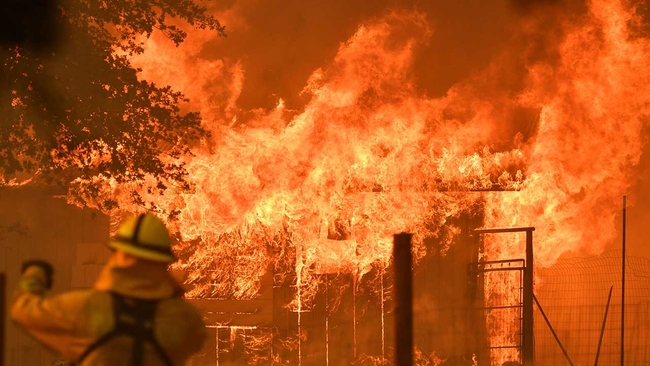