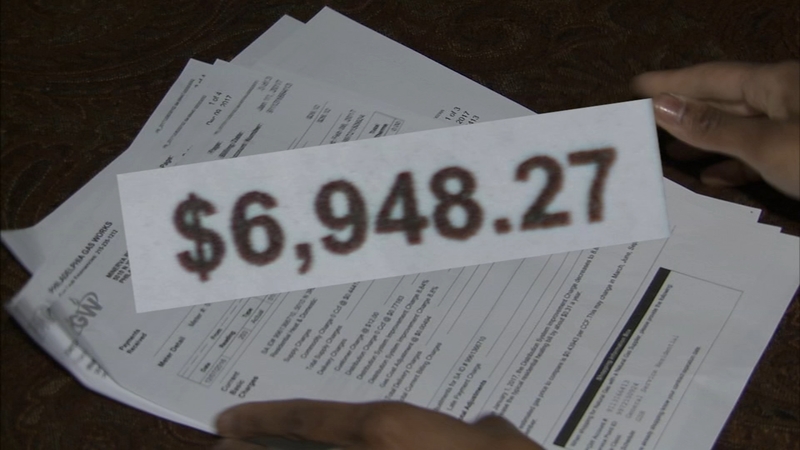 PHILADELPHIA -- A 71-year-old North Philadelphia woman has been slapped with a huge gas bill because a faulty meter was not giving accurate readings.

The utility is now trying to collect a large sum they say they are owed for the incorrectly measured past usage.
It's brought Roman, who is on a fixed income, to tears.

"They have a defective meter for so many years," said Roman. "Why do they make me pay for it? They should have to pay for it, not me."

Roman says she got hit with a gas bill of almost $7,000 last month after PGW replaced her meter in January.

The company said the original meter had not been correctly measuring her natural gas usage.

Once replaced with a new meter, her monthly bill went from an average of $13 to around $100. She was also billed for past usage she had never been charged for.

Roman said she didn't think the original bill was too low, because it was consistent.

"I thought it was normal because I've always had it like that," she said. "But I don't have any other house to check the different prices."

It's not immediately clear how long the original meter had been improperly working, but PGW says her current bill is accurate.

The company offered the following statement regarding the incident: "We didn't adhere to our customer processes, and the manner in which the situation was handled fell short of our standards."

The utility company says it's working to put Roman on a payment plan where she doesn't have to pay the $7,000 in one lump sum. But Roman says that's not good enough.
"It was their mistake. Their meter wasn't working properly," she said. "I can only pay $25 a month. I can't pay any more than that. I live on a fixed income. I can't afford higher bills than what I have now."
Report a correction or typo
Related topics:
home & gardenpennsylvaniaphilly newsu.s. & worldnatural gasconsumerbills
Copyright © 2022 WPVI-TV. All Rights Reserved.
TOP STORIES
Death toll rises to 21, mostly children, in TX school shooting
Uvalde school shooting: What we know about 19 kids, teacher killed
Republican candidates for Illinois governor face off in 2 forums
Father of Texas yoga instructor accused in cyclist's murder speaks out
Chicago expected to move to 'high' COVID level by Friday, Arwady says
Gary teen killed in shooting identified by family
Chicago Weather: Showers and storms Wednesday
Show More
Woman shot near CTA Red Line stop on South Side
Biden says 'we have to act' after Texas school shooting
1 killed in 10-vehicle crash on I-294 in Glenview
Long COVID symptoms mainly affect women in their 40s, study finds
Watch Steve Kerr's raw, emotional plea after Texas shooting
More TOP STORIES News