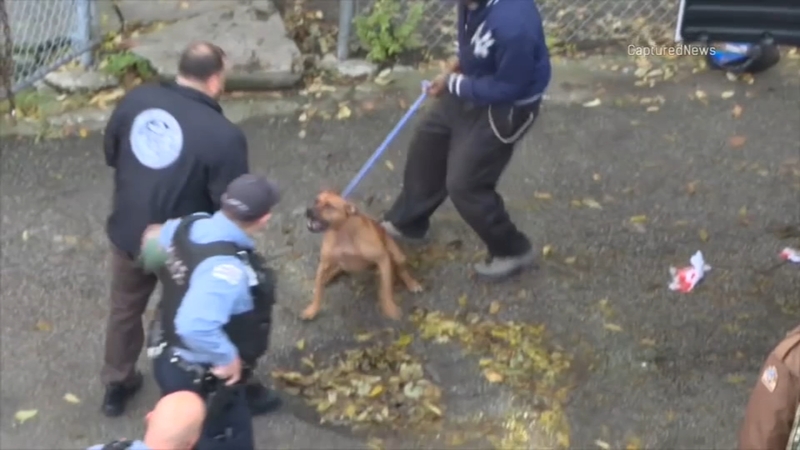 2 pitbulls attack man on South Side

CHICAGO (WLS) -- A man walking in an alley was attacked by two pit bulls Wednesday morning in Chicago's West Englewood neighborhood on the South Side.

The elderly victim was taken to Saint Bernard Hospital. Witnesses said he suffered injuries to his hands and shoulder.

The incident occurred at about 11:30 a.m. in the 5900 block of South Marshfield Avenue.

Workers boarding up a building across the street heard the commotion and helped the man.

"I jumped in my truck and tried pushing the dogs against the fence," said Joe Drish, a supervisor with Cook County Board Up. "I realized the dogs weren't going to push off the body, so I grabbed my nail gun and proceeded to shoot the dogs with my nail gun."

Chicago police and animal control took away the pair of dogs who were in the care of Renard Thurmand, 63.

Some of the scene was captured on cellphone video from across the street by neighbor Shantay Crenshaw.

"It was real bad," she said of the victim's injuries. "From his arms from his neck everything was bleeding."

The dogs are expected to be euthanized.

Thurmand, who expressed sympathy for the victim, maintains he was mistreated by authorities and wants his dogs back.

"I told them that if they are going to euthanize them they was going to have to shoot me too," he said.
Report a correction or typo
Related topics:
chicagowest englewoodpit bull attackdog attack
Copyright © 2021 WLS-TV. All Rights Reserved.
TOP STORIES
2 officers hurt, 21 arrested in Loop amid rash of violence: police
Man says he helped parents of accused Michigan school shooter
IL rental assistance program reopening for applications
Chicago police officers shot at in Gresham; 3 in custody
Washington Park Christmas tree burned by vandals to be replaced
Omicron updates: New US travel rules go into effect Monday
30 shot, 6 fatally, in Chicago weekend violence: CPD
Show More
COVID vaccine mandate announced for NYC private-sector workers
Actor Jussie Smollett trial resumes; unclear if he will take stand
OPRF could resume extracurricular activities as soon as Tuesday
Man inured in stabbing on CTA Blue Line train on NW Side
Fire breaks out at Hammond law office of murdered attorney
More TOP STORIES News