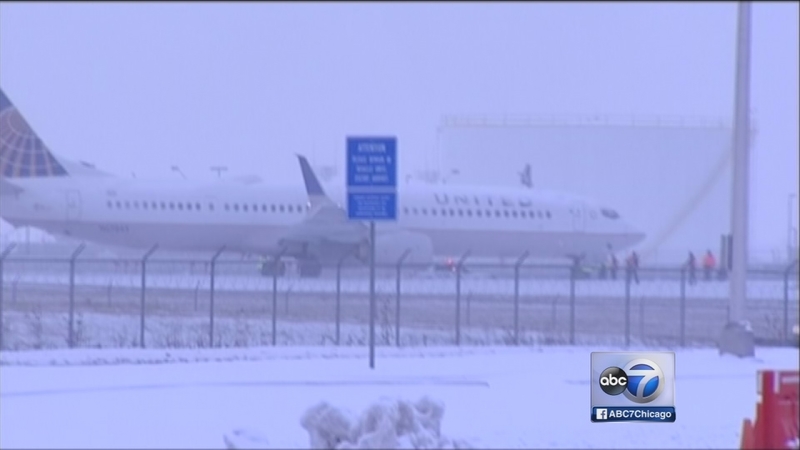 Plane slides off runway at O'Hare

It was snowing when United Flight 1977 began its descent into Chicago. The flight from Seattle had already been delayed two-and-a-half hours when it landed safely on Runway 27R around 7:40 a.m. Wednesday.

Passenger James Boer told ABC7 Eyewitness News that's when the Boeing 737-900 started to slide. The front two wheels ended up in the grass.

"The pilot told us that we were still on some of the pavement, but it's not on the main part of the runway. It felt like a car sliding on ice," Boer said.

Flightradar24 provided a screenshot of United Flight 1977's last position as it left the runway.

"We were coming in for the landing, it hit and it went a little farther than it should. That's when I was like, it probably skid out a little bit. You could feel it, but it wasn't that bad," said Sean Phillips, a passenger.

Boer said passengers sat on the plane about an hour after emergency crews arrived.

A passenger on United Flight 1977 from Seattle snapped this photo from inside the plane after it slid off the runway at O'Hare Airport.

"There was a Jeep that pulled up - four-wheel drive - all four wheels were spinning. So he had no traction at all. I can only imagine that airplane had zip traction," said Ken Sajeske, another passenger.

"The runway is so icy that the heavy equipment can't move the plane at this time, so they're trying to de-ice the runway," said Boer, shortly before crews pushed the aircraft back onto the pavement.

The plane made it to the gate without assistance. Some passengers missed connecting flights.

The Chicago Fire Department said no one was hurt. There were 164 people on board. The FAA is investigating.