PLUTO: View from the end of the Solar System

WLS
1 / 13
Pluto, barely visible by telescope in the night sky.
Adler Planetarium
On July 14, 2015, NASA's New Horizons spacecraft arrived at Pluto for the first time. The craft flew within 7,700 miles of the planet and is sending back reams of data and the highest resolution images of the planet ever taken. The journey, spanning 3 billion miles, took nine and a half years during which Pluto was demoted from planet to dwarf planet.

According to NASA, the spacecraft the size of a baby grand piano swept to within 7,700 miles of Pluto at 31,000 mph. It was programmed to then go past the dwarf planet and begin studying its far side.

"We have a healthy spacecraft. We've recorded data of the Pluto system and we're outbound from Pluto," announced mission operations director Alice Bowman. She was drowned out by cheers and applause; Stern ran over to give her a hug.

Confirmation of New Horizon's success came 13 hours after the actual flyby. It takes four and a half hours for signals to travel from New Horizons to Earth. The signal was received, Bowman said in a NASA press conference Tuesday night, at 8:52:37 p.m. ET.

NASA says it will hold a press conference at 3 p.m. ET on Wednesday, July 15, to share data and the newest, highest-resolution photos of Pluto.

Pluto just had its first visitor! Thanks @NASA - it's a great day for discovery and American leadership. pic.twitter.com/FfztBSMbK0

Pluto was discovered in 1930 by Clyde Tombaugh, then 23, who was born in Streator, Illinois. Adler Planetarium astronomer Dr. Lucianne Walkowicz told ABC 7 reporter Frank Mathie that the pictures are, truly, stellar.

The new, clear images of Pluto have prompted awe, wonder and excitement in people across the country and the world. It has also provoked some keen observations. One Twitter user pointed out the huge plain that some have called heart-shaped bears a striking resemblance to something else that shares its name with our former ninth planet.

"The best thing about the Pluto image from NASA today," he tweeted, "is the silhouette of Pluto the dog right on it."

The best thing about the Pluto image from NASA today is the silhouette of Pluto the dog right on it. pic.twitter.com/hVqD5QTwGz 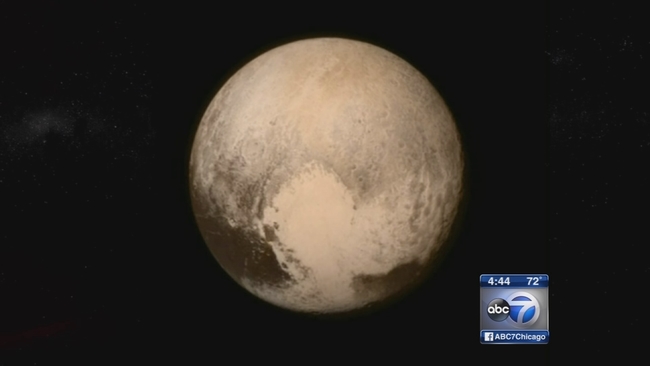