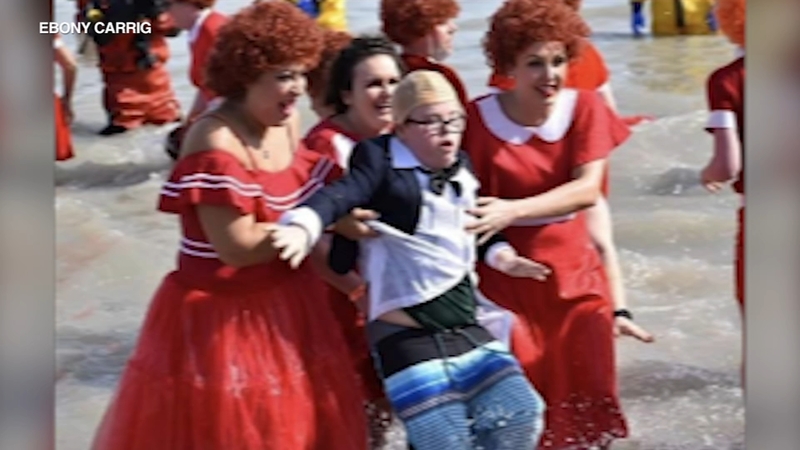 CHICAGO (WLS) -- A group of 75 people from the city's South Side got on board to brave the freezing cold waters of Lake Michigan Sunday, all for a good cause.

"I take the most pride out of the fact that we have the most donors. We don't have the highest money and that's fine. We've raised over seventy thousand dollars that kids can use for hopefully years to come," said Tim Carrig, the Kidd's Krue team captain.

The Polar Plunge is the largest fundraiser for Special Olympics Chicago. There's also a virtual option this year, after the entire event was virtual in 2021, due to COVID-19.

"It's great to be back in-person; everyone is so excited. We have a great day today; the sun is shining," said Carolyn Daley, Special Olympics Chicago Board president.

Over the last decade, the Chicago Polar Plunge has become the largest and most well-known plunge in the country, attracting celebrity plungers and garnering national and international attention, organizers said.
Plungers have included Vince Vaughn, Dax Shepard and Lady Gaga.

Chris Witaske, creator of the Chicago Party Aunt Twitter account and co-creator of the Netflix series "Chicago Party Aunt" was a VIP plunger and Chef Joe Flamm of Rose Mary Chicago also participated. He auctioned off a table for four at Rose Mary Chicago's anniversary dinner on April 20 to one lucky winner who donates over $25 to his Chicago Polar Plunge fundraising page.

About 4,000 people participated in the Polar Plunge this year and all the money raised helps pay for year-round athletic programs for thousands of athletes with intellectual disabilities. Transportation costs, sports equipment, and team uniforms are all covered by these donations.

"We have a good time, playing and joking. We have fun," Kidd said.

The Carrigs have taken part in the Polar Plunge since 2009. They always put together yearly costume. This time around, it was a Christmas theme.

"We've actually seen where the money goes, so it's been amazing. Kidd has been involved since he was small. We really made sure we got him involved early," said Ebony Carrig, Kidd's mother. "It's just been amazing and every year it's gotten bigger and bigger."

This year alone, Kidd's Krue has raised more than $70,000 for the Special Olympics. It's a community effort with a block party, businesses donating food and drinks. The proceeds benefit the athletes of Special Olympics Chicago.

"Just to support all the kids and Special Olympics, it's such a great cause. We have a great time here. Just seeing Kidd's face so happy, it's a special day for him. It's a joy to come out and see him," said Erin Harty, a Polar Plunge participant.

It makes for a special atmosphere at North Avenue Beach. It was also a special moment for Kidd to see all the people brave the cold waters for people just like him.