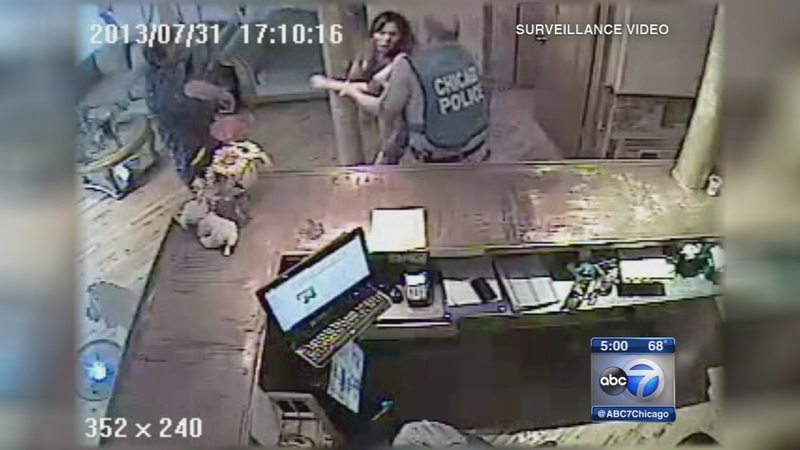 CHICAGO (WLS) -- Surveillance video has been released of a Chicago police raid inside a Noble Square tanning salon. The salon's owner has filed a federal lawsuit against the police department and the city alleging physical and verbal abuse by the officers.

The lawsuit claims the actions of the officers are a hate crime. Officers are heard on the video making racially insensitive comments.

The images are disturbing, showing a Chicago police officer hitting a handcuffed kneeling woman in the head during a raid of a West Side tanning salon. It was captured by a security camera during a Chicago police vice raid at the Copper Tan and Spa on Chicago's West Side last summer. It is now the basis of a lawsuit filed last week in federal court by 32-year-old Jianqing "Jessica" Klyzek and her attorney.

"I don't think the superintendent could take a look at that video and provide any justification for that," said Torreya Hamilton, Klyzek's attorney.

The video shows a Chicago police officer hitting a handcuffed and kneeling Klyzek in the head during a sting. An uncooperative 5-foot-2, 110-pound Klyzek is on her knees with her hands cuffed behind her back. One of the officers can then be heard verbally abusing her.

Officer: "You're not a expletive American. I'll put you in a UPS box and send you back to wherever the expletive you came from."

Klyzek is of Chinese decent and became a naturalized U.S. citizen in 2011. She's been married to an American since 2005.

Klyzek then says, "I'm a citizen, okay? To which the officer replies: "No you're not. No, you're not a citizen, no you're not! You're on borrowed time so mind your expletive business before I shut this whole expletive place down. And I'll take this place and then whoever owns it will expletive kill you because they don't care about you, okay? I'll make one call and I'll take this building. You'll be dead and your family will be dead."

Charges of aggravated battery to the officers and ordinance violations against a battered Klyzek were thrown out twice. Klyzek's suing, accusing the cops of excessive force, a hate crime and attempting to cover up their misdeeds by framing her. The city is also named the complaint.

"Both of her wrists, both of her legs are bruised up. She's got bruises on both of her arms, she's got an abrasion on her forehead," said Hamilton.

The incident followed a July 31, 2013 raid after an undercover officer was allegedly offered a sex act by a masseuse in back room of the salon where Klyzek is the manager.

The Independent Police Review Authority is now investigating as Hamilton says her client is scared and wants the officers fired.

"I can't see that those two police officers have any business wearing the uniform," said Klyzek.

A Chicago Police Department spokesperson says the matter is being investigated but if those comments are indeed true, he said they will not be tolerated by the police department.

Another salon worker was charged and he pleaded guilty to a misdemeanor, but that was later expunged.