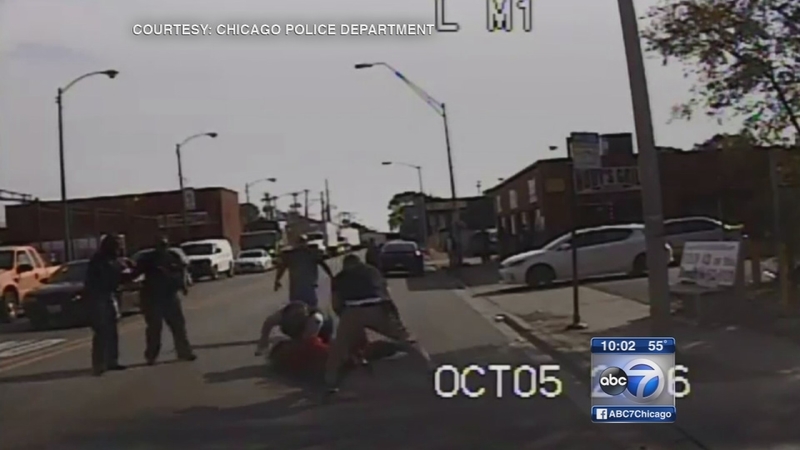 CHICAGO (WLS) -- Chicago police released dash cam and body camera footage of an arrest in which an officer was beaten by a suspect but did not fire her weapon because she feared community backlash.

The Chicago Police Department released two pieces of video from the arrest on Oct. 5. The video shows the incident near Roosevelt and Cicero, including officers struggling with 28-year-old Parta Huff. Huff, police said, was high on PCP and had just crashed his car into a business.

In the dash cam video the female officer and her partners detained the man, and he began to struggle with the female officer when she begins to handcuffs him. With only one of his wrists cuffed, the officer repeatedly instructs Huff to stop fighting and stop resisting. As the officers try to take Huff down, he takes the female officer down with him, her head pounded into the pavement. He is eventually handcuffed by other officers at the scene and taken into custody.

The body cam video, which came from an officer who joined the scene after the initial incident, begins while officers are already on the ground trying to subdue Huff. You can hear Tasers and officers struggling to pull Huff of the female officers, but he doesn't let go; you can see pieces of hair in his hand. Police struggled to get handcuffs on him.

The female officer remains hospitalized more than a week after the initial incident due to the injuries to her head. Huff was charged with attempted murder and aggravated battery. Police said he was high on PCP at the time of the incident.

Chicago police Supt. Eddie Johnson said the officer feared for her life and also feared the community backlash if she shot Huff.