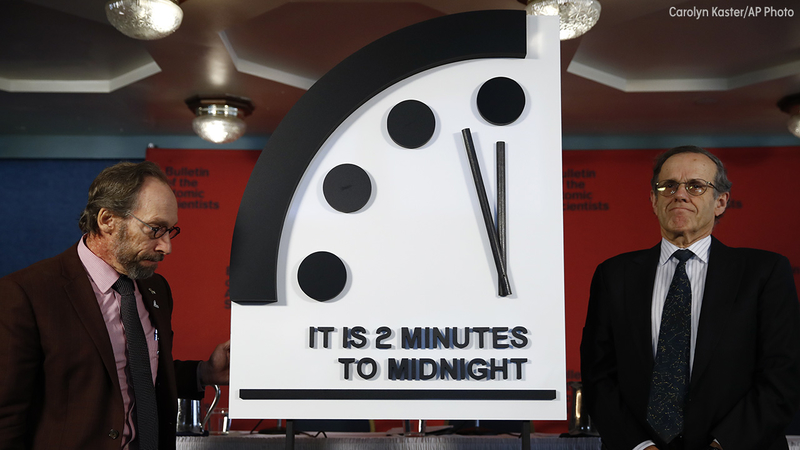 A panel of scientists and scholars said Thursday they believe the world is as close as it has ever been to a so-called doomsday scenario.

The Bulletin of Atomic Scientists, which has been tracking the threat posed by nuclear weapons and other technologies since the 1940s, moved the second hand forward on their Doomsday Clock forward closer to its symbolic apocalyptic midnight.

"It is with considerable concern that we set the time of the 2018 doomsday clock and offer a plea to rewind the doomsday clock," said Bulletin of Atomic Scientists President and CEO Rachel Bronson. "As of today, it is two minutes to midnight."

The board pointed to ongoing nuclear provocations from North Korea and the United States' response - specifically the "unpredictability in statements and tweets by the President of the United States," according to Bronson.

The last time the clock was so close to midnight was in 1953, the year both the United States and Russia exploded hydrogen bombs, when the U.S. and the Soviet Union were engaged in a nuclear arms race.

The furthest the clock has been from midnight is 17 minutes in 1991.

Chicago's Museum of Science and Industry is currently running an exhbit on the Doomsday Clock called Turn Back the Clock. The exhibit is included in general admission to the museum.