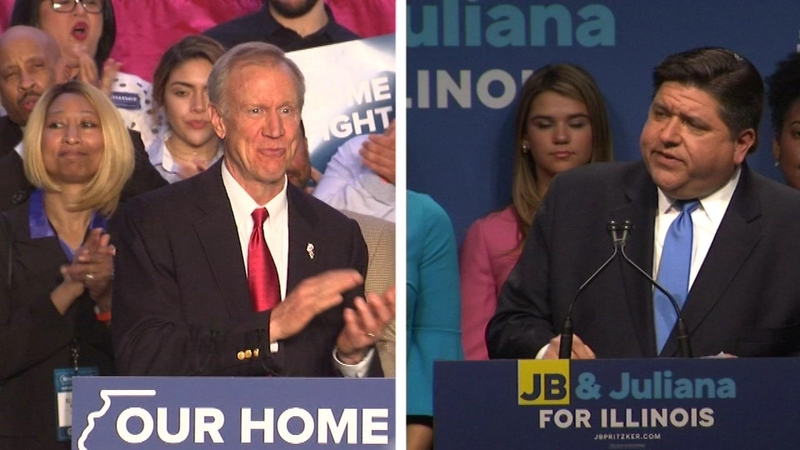 CHICAGO (WLS) -- The two main candidates for Illinois governor, Bruce Rauner and JB Pritzker, are spending a combined $300,000 a day on their campaigns.

According to a campaign source, Pritzker promised after the primary that for every dollar Rauner spends, he would spend two, and the second quarter reports that the candidates had to file by Monday night show Pritzker did that and more.

To put that in perspective, a four-year education at the University of Illinois' flagship campus in Urbana-Champaign costs about $125,000. Pritzker and Rauner spent enough between April 1 and June 30 to cover that tuition for the entire graduating class of a large high school.

"We have an unprecedented amount of money being put towards the gubernatorial race in Illinois," said Mary Miro, executive director for the Illinois Campaign for Political Reform.

If you break down that spend over the 91 day reporting period, Pritzker spent $221,000 per day and Rauner spent $86,000 per day. That's as much money as buying 91 three-bedroom bungalows in the Belmont Gardens neighborhood, or the same number of four-bedroom condos in Hyde Park.
According to the Illinois Campaign for Political Reform, Pritzker more than doubled Rauner in money spent on advertising, paying out $10,792,962 compared to Rauner's $4,780,866.

The financial reports showed Rauner still has $31 million in his campaign coffer, while Pritzker has $18 million. Both have the means to add as much to those coffers as they need to.

The record for spending on a gubernatorial race was set in California in 2010. There are many who predict Rauner and Pritzker will break that record by the November election.

Chicago Mayor Rahm Emanuel's fundraising ability has been one of his greatest strengths throughout his political career.

Chicago Mayor Rahm Emanuel's fundraising ability has been one of his greatest strengths throughout his political career, as a candidate as well as behind the scenes with the Democratic National Committee and President Bill Clinton.

Now in his bid for a third term against a crowded field of other candidates, Emanuel is stockpiling cash in his campaign coffers.

According to the second quarter financial reports, Emanuel raised over $6 million. The next closest candidate was Lori Lightfoot with just over $500,000, and then Paul Vallas at $435,000. Willie Wilson reporter $296,000, although most of that is his own money, and Garry McCarthy was the only other candidate to raise six figures with $245,000.

The four remaining candidates were far behind.

Speaking at a campaign event where he go the endorsement of community activist Andrew Holmes, McCarthy did not seem concerned about the fundraising at this point.

"If anybody thinks this election is going to be about money, I think you're sorely mistaken. I think it's about the direction a great American city is going," he said.

Lightfoot's campaign also downplayed the money, saying, "Voters aren't focused on the size of a candidate's war chest-they're concerned with making sure the next mayor is someone they can trust."

Vallas' campaign spokesman said, "We are confident that we will have the resources to get our message and record to the voters."

A spokeswoman for Emanuel said the mayor will have the necessary resources to deliver his message and vision to voters.
Report a correction or typo
Related topics:
politicsillinoisbruce raunerjb pritzkermoneygovernorcampaign
Copyright © 2021 WLS-TV. All Rights Reserved.
TOP STORIES
DaBaby dropped from Lolla lineup due to recent homophobic comments
44 shot, 4 fatally, in weekend gun violence: Chicago police
Fauci warns 'things are going to get worse' with COVID
Mayor pushes for more vaccinations to avoid another shutdown
Lollapalooza to wrap up as one of city's largest events since pandemic
120 laid off by Chicago's Morton Salt company
Boy, 14, dies days after shot twice in the head while in parked car
Show More
Illinois to open reservations for controlled pheasant hunt
Chicago Weather: Mostly clear, pleasant Sunday night
24K gold tequila bottle sells for $300
Chicago, Cook Co. announce 'universal' indoor mask guidance
Saturn will glow brightly in the sky this week: How to see it
More TOP STORIES News