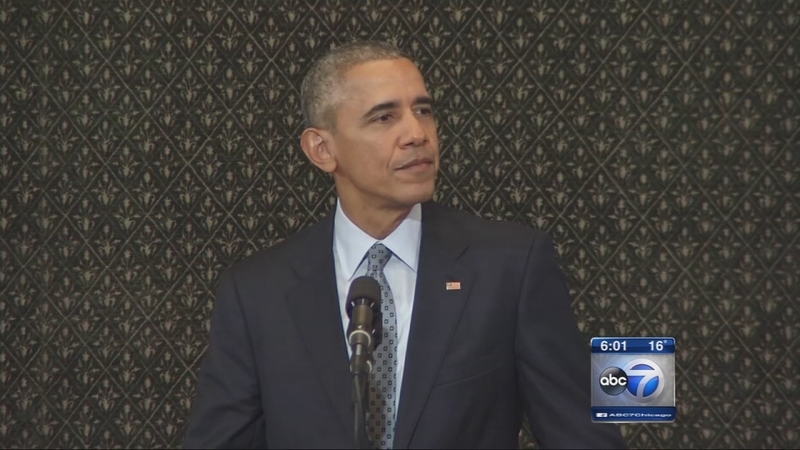 The state capital is where President Obama launched his national political career exactly nine years ago.

The lame duck/nothing-to-lose president chose the beleaguered Illinois state capitol - and many of his friends for an audience - to make his "building better politics" speech. He focused on the polarization and gridlock in Congress and in legislatures around the country. He called gridlock - and his inability to break it in Washington - his presidency's most frustrating constant.

The self-described progressive Democrat remembered better times as a state senator in Springfield when he worked across the aisle with Republicans.

"Where I've got an opportunity to find some common ground, that doesn't make me a sellout to my own party," he said. "Away from the glare of TV or the tweets or the gifs of today's media. What we discovered was that despite our surface differences, Democrats and Republicans - despite those differences we actually had a lot in common. I speak to both sides on this. Because all of you know it could be better. And all of you would feel prouder of the work that you do if it was better."

Then the president took on politicians like Gov. Bruce Rauner, who spent tens of millions of his own money to get elected.

The president did not make specific recommendations on how Democratic lawmakers and Rauner might eventually agree on a budget. But his general observations about political gridlock hit home in his home state.

"If we can't compromise, then by definition, we can't govern ourselves," he said.

In route to the capitol, Obama's motorcade stopped at a restaurant in Springfield that he frequented as a state senator 15-20 years ago.

President Obama stopped by Feed Store in Springfield, Ill., a favorite lunch stop during his time as a State Senator, and chatted with some kids.

The president's speech on building better politics got rave reviews from both sides of the aisle.

"He was enumerating issues where we could compromise," said State Sen. Christine Radogno. "Such as collective bargaining, and that's when some of the Democrats stood up to applaud. I think the idea he was trying to forge - and he asked them to sit down because they were missing the point - that we need to compromise on these ideas."

"Everybody was kind of called out a little bit in things he thought were important but I think what is important that we get out of this is that we need to act in a more civil manner towards each other and we need to compromise more, that's how we're going to get through this budget impasse," said State Rep. Jim Durkin.

"We need to accomplish work in both places, both Washington and here. The fact of the matter is whatever happens in Springfield affects everybody in Illinois as does everything in Washington," said U.S. Rep. Tammy Duckworth.

During his State Senate days, the South Side liberal was a regular at bipartisan poker games with downstate conservative and suburban lawmakers.

"I wish he was half as conservative with the tax dollars as he was with the poker dollars," said State Sen. Bill Brady.

"You had a Republican governor at that time and you knew had to deal with the other side to get something done," said State Sen. Terry Link.

"I gave him tough assignments and but I said, 'Make friends with the legislators outside of Chicago.' And he did that," Jones said.