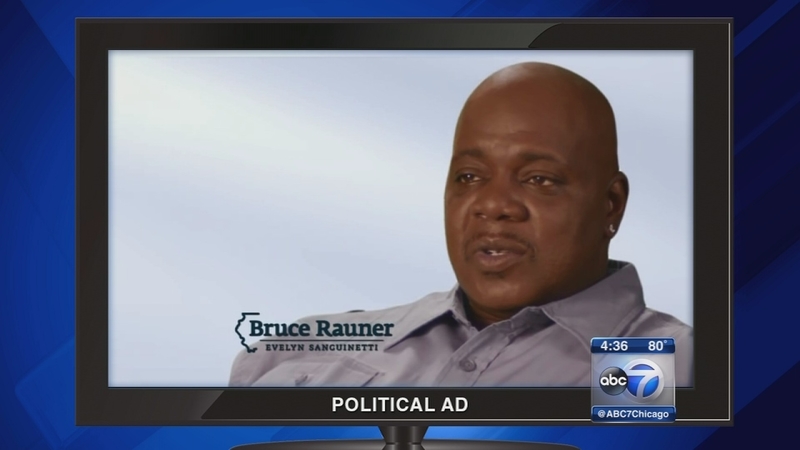 CHICAGO (WLS) -- Gov. Pat Quinn's supporters are questioning Republican candidate Bruce Rauner's commitment to diversity. At issue: hiring practices at a firm Rauner left when he announced he was running for Illinois governor.

Commercials featuring minorities who say they plan to vote for Republican Bruce Rauner are central to the political battle over African American and Latino support.

"He will follow through on every promise he has made about education," an African-American woman says in a Rauner ad.

To unseat incumbent Quinn, the wealthy businessman must lessen the Democrat's support among African American and Latino voters, whom Rauner has courted with his ad campaign.

"The thing to look at is: What were you doing when no one was watching, when you weren't running?" said attorney Marty Castro.

Castro is a Quinn supporter who also chairs the United States Commission on Civil Rights. He reviewed the website of GTCR, the private equity firm Rauner ran for decades, and counted few minorities.

"You look at that leadership team and you see zero African-Americans, one Hispanic?" Castro said.

"We were frustrated," Rauner said. "We weren't finding the folks. They weren't there."

"I think it's not a really good excuse that you can't find any," said Ariel Investments CEO John W. Rogers.

Rogers, who has not endorsed either candidate, is skeptical of any corporate leader who in this day and age has not hired a diverse workforce.

"It at least has to make you question the commitment of that individual," he said.

"If you think about what's happened to the black community over the last 20 years, what's changed? You tell me what's changed," Anderson said.

Rauner says he wants to run state government more like a business.

"When I say I want to run it like a business, I want to deliver those results. And we can have people of all backgrounds involved," said Rauner.

"I really believe that past conduct is the best indicator of future conduct," Castro said.

The Rauner campaign also noted that its lieutenant governor's candidate is Evelyn Sanguinetti, a Latina.