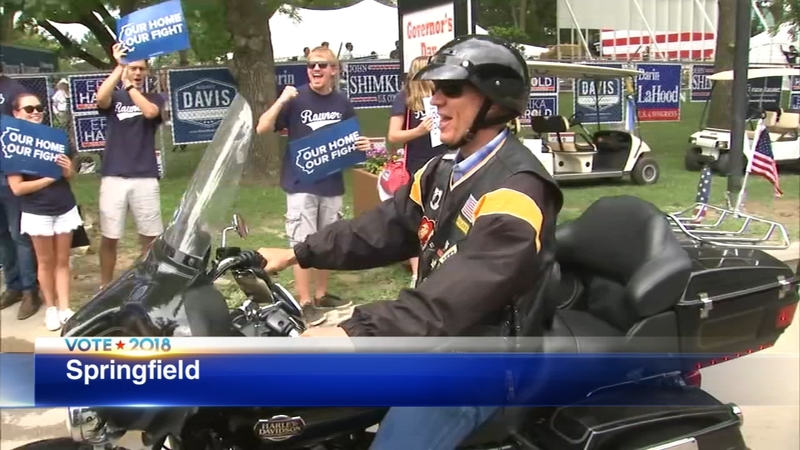 SPRINGFIELD, Ill. (WLS) -- Politics was the main attraction at the Illinois State Fair on Wednesday as politicians launched the unofficial start to the election season at the fair's Governor's Day.

Gov. Bruce Rauner, who arrived to the fair on his Harley, rallied the party faithful, painting a bleak future for Illinois if he is not re-elected in November when he faces Democrat gubernatorial candidate J.B. Pritzker.

The official theme this year, "Our Home, Our Fight."

"This is where we make it all happen, this is where we get everybody fired up. One of the most important elections in Illinois history," Rauner said.

Rauner shrugged off suggestions that Republicans might support him as the lesser of two evils compared to Pritzker.

"One thing that brings us all together and will unite us in November is knowing that now is the time for Mike Madigan to retire," Jim Durkin, House Republican Leader said.

"Can we continue to fight back and break the stranglehold that Mike Madigan's machine's has on our state, can we break that lock hold and grow jobs, cut the taxes get term limits, end the corruption," Rauner said.

"This will be a tough fight but as Senator Raoul will find out, I may be Miss America, but I am not Miss Congeniality," Harold said.

Rauner praised President Donald Trump for his tax and trade policies, but he criticized the president for calling his former aide Amirosa Manigault a "dog."

"That's appalling rhetoric, that rhetoric has no place in public discourse," Rauner said.