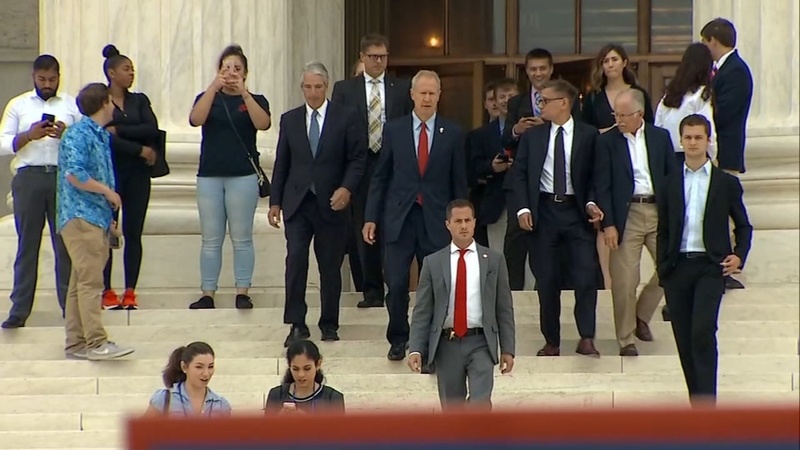 WASHINGTON (WLS) -- The U.S. Supreme Court ruled Wednesday on a case out of Illinois, which has been championed by Governor Bruce Rauner.

WATCH: Mark Janus speaks after US Supreme Court strikes down union fees: 'It is up to the worker to decide'
EMBED More News Videos

The Supreme Court ruled Wednesday that government workers can't be forced to contribute to labor unions that represent them in collective bargaining, dealing a serious financial bl

The ruling comes on the last day of the court's session this year. The decision drew sharp criticism from unions, while being praised by the governor. He was in Washington D.C. for the announcement.

"Today's Supreme Court ruling in the case of Mark Janus v. AFSCME is a historic victory for freedom of speech and freedom of affiliation for public-sector employees. It is also a historic victory for taxpayers who, for too long, have borne the unfair, high cost of the conflicts of interest apparent when government union leaders negotiate with, but also support politicians," Rauner said.

The Chicago Teachers Union is among those decrying the Supreme Court's decision, a 5-4 ruling that said charging non-union members "agency fees" for representation violates their First Amendment rights. Unions could lose millions of dollars as a result.

The majority opinion, written by Justice Alito, sided with Mark Janus' contention that forcing him to pay fees to a union that advocates public policies he opposes violated his free speech rights. Janus joined Rauner in Washington for the ruling.

"It is a very historic day. We now have 5 million public-sector non-union members that can make their own choice as to whether they want to be a part of that union. It will not affect the collective bargaining. Unions will have that continued right. It's just that the worker now has the ability to make his own decision or her own decision. That's why I brought this case. It is up to the worker to decide what they want for themselves, not some other larger entity. It's not anything unusual than what we do in our daily lives as we go about our daily lives. That's what is so important. That's what the basis of this whole case is about," Janus said.

Unions - and the Democrats they usually support - are blasting the ruling as an attempt to defund unions, drive down membership and in the process drive down wages for working families.

The high court's decision overturns a legal precedent that stood for 41 years and impacts 22 states that allow unions to charge the agency fees. Union officials in Chicago said they will continue to fight.

"Our movement is not going away. We're going to continue to advocate for what's just. The Supreme Court be damned," CTU Vice President Jesse Sharkey said.

Rauner originally brought the challenge to union agency fees in 2015, issuing an executive order. After a lower court ruled he did not have standing, Janus then took up the case.

"This case is a blatant political attack by Bruce Rauner and other wealthy interests on the freedom of working people to form strong unions. We are extremely disappointed the Supreme Court has taken the side of the powerful few, but we're more determined than ever to keep our union strong, standing up for public services and the working people who provide them," AFSCME Council 31 Executive Director Roberta Lynch said. "The powerful interests behind this case have tens of millions of dollars to pour into their political agenda of trying to silence us. But we aren't afraid and we aren't going anywhere," Council 31 Director Lynch said. "We're making certain that every union member knows the real intent of this case is to defund unions, then drive down wages and benefits of public service workers. We're not going to let that happen."
The Chicago Teachers Union released this statement in response to the ruling:

"Today we will see neoliberal Democratic Party political bosses like Rahm Emanuel shaking their fist at this decision, acting as if they have not been bi-partisan partners in the erosion of workers' rights, co-conspirators in the austerity movement and willing allies in the theft of job and retirement security.

In Chicago, where union jobs have been the pathway to the middle class for women and Black and Latinx families, the attack on public employees is both sexist and racist. While today's attack will hit all working families hard, in Chicago it will disproportionately hurt Black and Latinx households already reeling from the foreclosure crisis, cuts to social services, school closures, unrelenting violence and high unemployment. Rahm has done nothing to address the needs of these constituencies or these critical issues - or at least, nothing good.

Janus was instigated by a particularly bad boss, billionaire Bruce Rauner, who helped Rahm earn $18 million in under three years. Rahm returned the boss's favor by using Rauner to bash public school teachers. Rauner made billions as a vulture capitalist through outsourcing and layoffs -Rahm's twin strategies as Chicago's mayor. Rauner and his fellow bad bosses have mounted a national offensive to defund unions, undermine a national teachers' movement against austerity, and undercut workers' rights. Locally, Rauner and his pals have eagerly worked with Rahm to hand out public dollars to wealthy corporations that don't need them, at the expense of working class Black and Brown families.

The bad bosses and elites behind Janus are the same players who seek to gut our nation's economic and social safety nets and push education 'deform' schemes like school privatization - just like Rahm. These policies undermine public education, public health, affordable housing and a host of other vital public rights, driving displacement, unemployment, mass incarceration, racism and hostility to immigrants.

With Rahm, we've lived under the Janus' agenda for years, with this mayor working the same toxic playbook to undercut public needs from affordable housing and health care to public education and living wages for ordinary workers. That has to end. The outrage over our rigged economic rules has fired a growing movement for living wage work, equity and fairness for working people. It cost one of the city's most powerful Democratic politicians - a political ally of Rahm's - his job as assessor. No court ruling can stamp out the demand for fairness - or the power of organizing collectively for our rights and our dignity. We can start right here in Chicago by calling out the sell-out allies of the Janus agenda for what they are: enemies of working people who do not deserve another day in public office."

Chicago Mayor Rahm Emanuel released this statement in response to the ruling:

"This morning, the Supreme Court upended decades of precedent and progress for working families. I have worked closely with organized labor in stabilizing Chicago pension funds and employees' retirement security, ensuring responsible wage growth and managing the cost of health care. From rank-and-file membership to leadership, I have always found a willingness to come to the table, roll up their sleeves and get the job done in a way that is responsible and respectful of taxpayer dollars. Governor Rauner and many Republicans are rejoicing at today's decision, but we should be clear that this is no cause for celebration. This decision is an insult to the middle class and a step back for progress."