WLS
By ABC7 Eyewitness News Team Coverage
CHICAGO (WLS) -- Students across the Chicago area and the country walked out of class as part of a protest against gun violence Wednesday.

The walkouts took place at 10 a.m., marking one month since the Parkland school shooting that killed 17 people. Many schools held 17 minutes of silence, once minute for each victim.

"This is about you, and you are going to show us adults what we are supposed to do," Father Michael Pfleger told the assembled students at St. Sabina.

Students across the Chicago area and the country walked out of class as part of a protest against gun violence.

Joined by former Secretary of Education Arne Duncan, Pfleger and students from the three schools marched to Renaissance Park in solidarity with the more than 3,000 schools across the country taking part in the mass protest.

"I think you are going to look back at this and say 'I was a part of history, I was a part of making our country better and safer for myself, my family and other kids,'" Duncan told the students.

Students made signs pleading for peace. The Parkland shooting may have motivated the national walkout, but young people in Chicago's Auburn Gresham neighborhood have their own motivation.

"Stop the violence and stop killing people and put the guns down," the 4th grader said.

Zyhenn Hart, also a 4th grader, lost her uncle, but even more traumatic was her experience at her grandmother's house when stray bullets struck her grandmother.

"My heart breaks daily when the kids are very much aware of the various killings, and to see how they are greatly affected by the recent killings in Parkland and how they have a strong desire to see a change take place," said Angela Oates, St. Sabina teacher.

"In 2016 I lost my brother Armani Dickerson," said Amaria Broyles of Perspectives Leadership Academy. "It's been hurtful for me but I live through it by being positive and trying to make a change in this city."

"I think a lot of our young people are saying, 'adults failed us. Adults have not done what they needed to do' and the kids are the ones suffering. They are the victims in this," Fr. Pfleger said.

The Chicago schools also added three extra minutes of silence to the program: one minute to honor Commander Paul Bauer and two minutes for those killed by gun violence.

The walkout ended with a balloon release: a blue balloon for Commander Bauer, 17 white balloons for the victims in Parkland, and dozens of red balloons bearing the names of people the students knew have been affected by gun violence.

The nationwide demonstrations have gotten mixed responses from school administrators and politicians. The Chicago Republican Party is now threatening a lawsuit accusing CPS principals of forcing students to participate.

"We will not enact any disciplinary measures. We think it's critically important that the student's voice is heard at this critical point in our history," Jackson said.

Students in Chicago and the suburbs took part in a national school walkout to protest gun violence.

In the Pilsen neighborhood, hundreds of students at Benito Juarez Community Academy also walked out of class.

"It's not just gun violence that happened in Florida in Parkland it's happening around us it's happening near us students should be able to feel safe in the school they go to," said student Jocelyn Capetillo.

"It is getting pretty old that the government is now ignoring us after multiple school shootings and that's obviously starting to affect us," said student Paola Hernandez.

On Chicago's Northwest Side, more than 1,000 students took part in a walkout and rally outside Mather High School.

Carrying signs and chanting "enough is enough," students rallied in Mather Park, where they held up photos of the Parkland victims and paused for a moment of silence before returning to class.

More than 1,000 students took part in a walkout and rally at Mather High School on Chicago's Northwest Side.

Former Illinois Governor and current Democratic attorney general candidate Pat Quinn joined students walking out and Mayor Rahm Emanuel visited with students who are part of a youth mentoring program before the walkout. Emanuel is continuing to hammer Governor Bruce Rauner about vetoing a bill that would require gun stores to be licensed.

"Governor Rauner abdicated the responsibility of leadership by vetoing something when it was right for the future of these young men and women," Emanuel said.

Capping the day of activism, Chicago students held a die-in outside City Hall in the evening.

THOUSANDS OF STUDENTS WALK OUT ACROSS SUBURBS

Suburban schools took part in the walk out as well.

Hundreds of students at St. Charles East High School gathered in front of their school holding signs and demanding change. While many of these students still can't vote, they are calling on politicians to listen and take action on gun control.

Hundreds of St. Charles students walked out of school Wednesday to demand gun control legislation and action from politicians to protect them.

"School should be a place where every kid feels safe, and it's not anymore," said Clarissa Barbosa, junior.
"We need to reignite this issue and we need to realize it's not just an issue that we should look at in a time of crisis," said Jake Wisher, junior.

"We're the ones being affected, too. It's our schools getting shot up. And we feel unsafe. And our safety is so important," said student Grace Yong.

Students returned to class after the protest was over. And while the district isn't taking a side, it is says this is a real life civics learning opportunity about non-violent protest.

"Students often don't feel like they have their voice in the civic process. Most of us can't vote. But this reminds students that they do have a voice. They can be a change for good. And if they use that voice, they can be very powerful," Barbosa said.

In Barrington, hundreds of students took part in the walkout. Organizers said they initially hoped 50 to 100 students would take part, but they had about 10 times that number Wednesday morning.

Much of the student body left the school and gathered at the football stadium for a rally.

Hundreds of students at Barrington High School walked out of class and to a rally, where they demanded stricter gun control from legislators.

"Students should not have to worry about their safety in school," said Michael Herr, student organizer.

School officials supported the effort but did not participate. Many students decided to leave campus at their own risk.
Once the rally at the stadium was over, many students marched to a park, leaving the campus. They were warned that they would be marked absent for the classes that they missed.

A number of gun rights advocates also turned up for a counter protest. They support arming teachers, and said their objective is the same as the other protesters: protecting all of the students.

Most of the students, as well as some parents and grandparents in attendance, are calling on politicians in Washington and Springfield to enact stiffer gun control laws.

"This is a perpetual American tragedy that plays out over and over again," said Wilder Seitz, student organizer.

This was the first experience with political activism for many students at Barrington, and many said they are motivated by the response to continue their efforts.

In Romeoville, the walkout was postponed after a student posted a picture on social media holding a weapon, Valley View School District 365 spokesperson said. The photo did not have a caption and police investigated and determined there was not a viable threat. Students were allowed to walk to the gym. 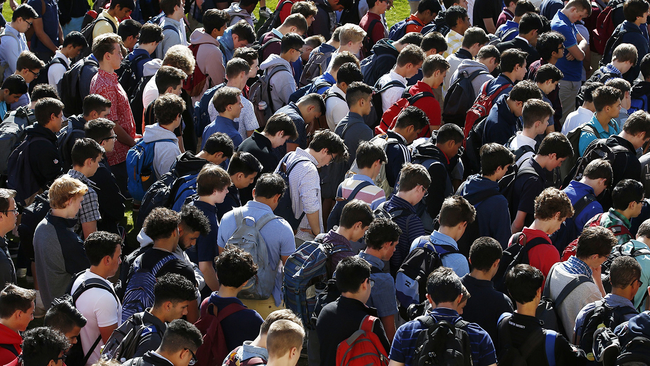 Videos from the #Enough walkout around the country 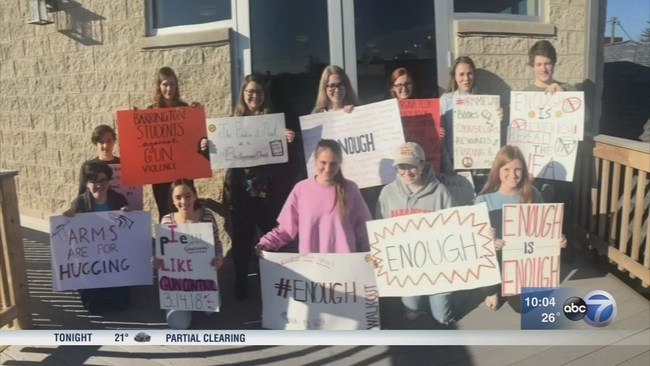