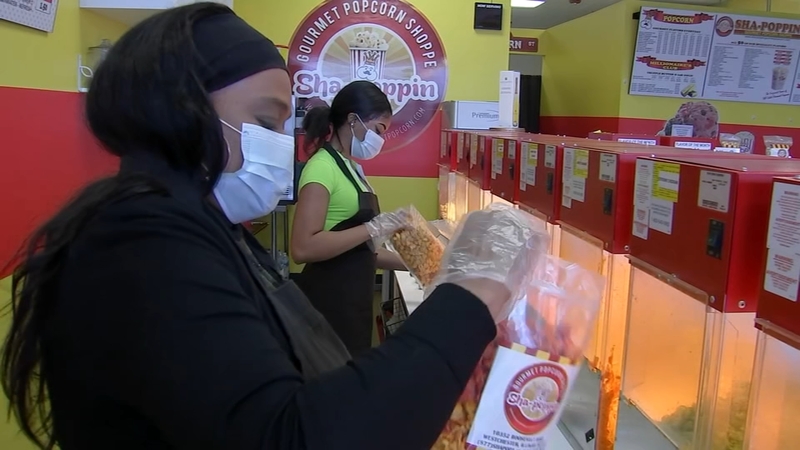 WESTCHESTER, Ill. (WLS) -- Sha-Poppin' Gourmet Popcorn Shoppe is tucked into a strip mall at Roosevelt and Mannheim roads in Westchester. Its owner is now taking on a big bank.

Sha-Poppin' Gourmet Popcorn Shoppe is tucked into a strip mall at Roosevelt and Mannheim roads in Westchester. Its owner is now taking on a big bank.

"Someone has to speak up for small business," Stacy Hawkins-Armstrong said.

Hawkins-Armstrong said Chase delayed her applications for a federal loan with the Payroll Protection Program. She is now the lead plaintiff in a class action lawsuit against Chase Bank and some Chase clients.

The lawsuit alleges Chase was negligent and used deceptive and unfair practices in distributing PPP loans.

Dore hopes the litigation will free up money to be distributed to struggling small businesses.

Chase is among four banks being sued in California regarding distribution of PPP loans. ABC7 Eyewitness News reached out to Chase, but a spokesman said they decline to comment on pending litigation.

While waiting, Hawkins-Armstrong turned to Seaway Self Help Federal Credit Union, a small community bank, and was able to get some PPP money through them.

"It was less than what I was expecting, but it's something," she said. "It's a relief to have something. Something is better than nothing."

She said the money will help pay her employees, but in the long run the future of her business is uncertain.