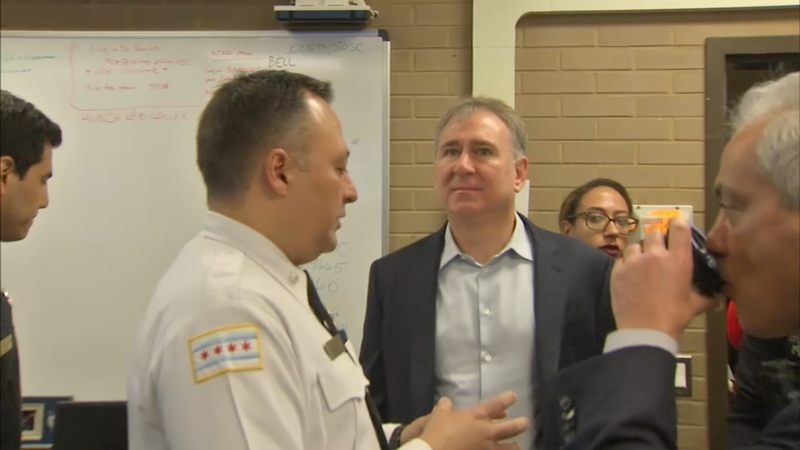 CHICAGO (WLS) -- Chicago police are getting a $10 million dollar donation to help with crime fighting technology. The donation is coming from billionaire philanthropist Ken Griffin who is well known for his political giving, but who has also invested money in soccer fields and bike paths here in Chicago.

Wednesday morning Griffin joined Mayor Rahm Emanuel and Police Superintendent Eddie Johnson to get a firsthand look at the technology his donation will help pay for. The Strategic Decision Support Centers (SDSC)," which are already in six police districts, will be doubled this year, starting in the 25th district in the Belmont Cragin neighborhood on the west side.

THe SDSC's are part of a collaborative effort with the University of Chicago Crime Lab to use crime data to better predict crime patterns so police can more effectively deploy resources.

"We can always sometimes in this moment in time get enamored with technology, it's what it enhances for the officers in real time in capacity to do good policing work," said Mayor Rahm Emanuel

"The business community in Chicago has a long history of civil engagement. And I hope the impact of this initiative will inspire my fellow entrepreneurs and business leaders to focus more resources, more time and more energy on making our city safer for all," said Ken Griffin, Citadel CEO.

The technology combines gunshot detection systems, digital cameras and software that helps police track areas in communities that are at the risk for violence. The use of the technology in Englewood has helped reduce shootings there by 67% compared to 2016.

Additionally, a public safety training academy for police and fire will be built in Belmont Cragin. Emanuel said new officers have been trained on mental health, de-escalation, how to use a body camera and how to do community policing.

"These are things that weren't in place even a few years ago," he said.

Griffin, listed by Forbes as the state's richest man, has in recent years donated $125 million to the University of Chicago's economics department and $12 million for walking and bicycle paths along Chicago's lakefront.

Chicago police are getting a $10 million dollar donation to help with crime fighting technology.