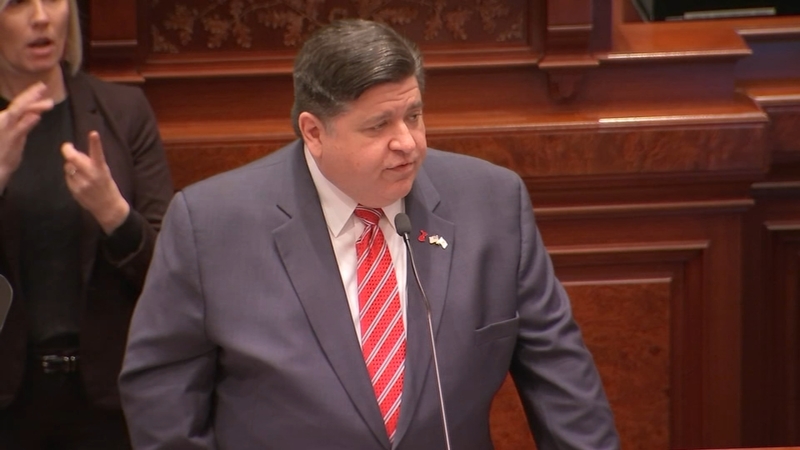 The spending plan would provide more money for education and social services, but it would also incorporate additional spending if his graduated income tax plan gets voter approval in November. That raised some red flags.

"The budget I propose to you today will build on the steady progress we've been making over the last year," Pritzker said.

While the governor got a bipartisan round of applause as he entered the House chamber, his budget was not as equally well received.

The budget includes $225 million in what he called operational efficiencies and consolidations, as well as $46 million in projected revenue from the sale of recreational cannabis.

"I especially loved the governor's efforts around education, it started with early childhood education, advanced the funding efforts in K through 12," said Senate Majority Leader Kimberly Lightford. "He highlighted a lot of efforts around higher education, MAP grants, moving to free tuition."

There will also be a 20 percent increase in spending for the troubled office of the Department of Children and Family Services.

"There's nowhere in state government that needs more attention and resources than the Department of Children and Family Services," Pritzker said.

But the governor is also looking to spend an additional $1.4 billion if voters pass his graduated income tax plan in November.

"We do not have to go down this road of holding, I would say, health care providers and also K through 12 hostage with his holding back of that money if we don't pass the constitutional amendment," said House Republican Leader Jim Durkin. "It's a wish list, but I think it's on the wrong track."

Now that the governor has laid out his budget, Republicans and Democrats will spend the days and weeks ahead dissecting it, with much work ahead to come to a balanced budget.

"Today, the only thing Governor Pritzker offered was new spending proposals and a false choice between the progressive income tax and devastating cuts," he said. "Any budget address or solution that stops short of proposing substantive reforms to our pension mess is an unserious attempt at papering over our fiscal disaster with accounting gimmicks and false promises. Illinoisans deserved to hear from a courageous Governor willing to make tough budgetary decisions today. Instead, they heard from a politician hiding behind scare tactics and impossible promises."

Assistant Majority Leader Iris Y. Martinez, D-Chicago, disagreed, saying "I support the ideas in this proposal to invest more state funds in student misconduct investigation cases and child care programs to ensure safety and accountability for our youth, as well as census outreach opportunities to prioritize a correct count this year. I am confident we will produce a fiscally responsible, bipartisan budget bringing stability back to Illinois residents."

"I applaud his emphasis on the need to tackle college affordability and his recognition that early childhood education is the best investment we can make in our future," he said. "The bottom line is this proposal is a great starting place for the work we'll do in the coming weeks, work that I hope will again bring Republicans, Democrats and the governor together in balancing the budget, funding priorities and moving Illinois forward."

Pritzker talked progress and problems during his 2020 State of the State address. That speech was just one day after former state Senator Martin Sandoval pleaded guilty in a corruption case. The governor touted job growth and the state's lowest unemployment rate in history, as well as tax cuts for businesses as a sign the state is rebounding.