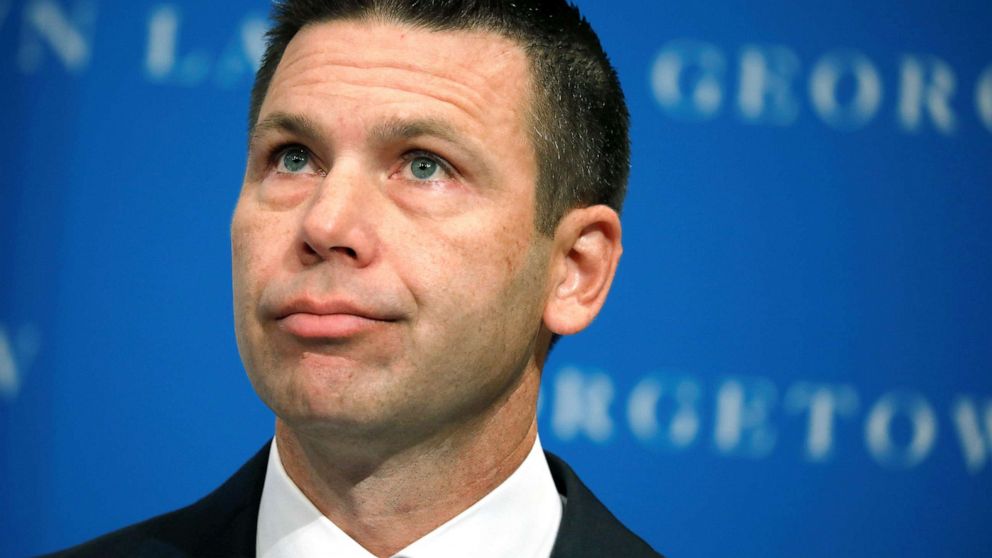 As McAleenan was introduced to speak at the Migration Policy's Institute's annual immigration forum, demonstrators in the crowd stood up, holding up banners that read "stand with immigrants" and "hate is not normal."

"When our immigrants are under attack what do we do?" some of the protesters chanted.

"Stand up fight back," others chanted back.

McAleenan tried to start his remarks multiple times, but was shouted down as more protesters in the crowd stood up and started chanting.

"When children are under attack, what do we do?" some shouted.

"Stand up fight back," others repeated.

One of the protesters, a member of the liberal activist group Credo Action, later blamed the organizers for giving McAleenan a stage to argue for the administration's hard-line immigration policies.

"No Trump henchmen should be given a platform to spread hatred or defend the racist, xenophobic policies put into place by Donald Trump and Stephen Miller," said Credo Action campaign director Nicole Regalado. "Institutions that elevate the architects and enforcers of Trump's hate and normalize that cruelty can expect to hear from us."

McAleenan attempted to start another time but was shouted down again. One protester shouted "bull****" in response. Another called him a liar. McAleenan then departed the lectern and Meissner announced the conference would continue with the next scheduled panel.

The Migration Policy Institute is a nonpartisan research organization that has served as a reliable resource for impartial data on immigration policy under heightened attention the topic has received in the Trump era. MPI President Andrew Seele said it was regrettable that the protests forced McAleenan to leave.

"By drowning out the Secretary's remarks, the protesters deprived immigration attorneys, service providers, journalists, advocates, business leaders, law students, and many others in the public who were in the audience from hearing his point of view and engaging in a meaningful dialogue," Seele said.

McAleenan's predecessor, Kirstjen Nielsen, was heckled while trying to eat at a Mexican restaurant last year amid the uproar over the administration's "zero tolerance" policy that resulted in hundreds of families forced apart.

In a statement from the Department of Homeland Security, a spokesperson and said the protesters "robbed" McAleenan and others of their First Amendment rights.

"The Acting Secretary thanked the (event) organizers and returned to work protecting the Homeland and American values," the department said in a statement. "Event attendees would have learned more about DHS's successful strategy to work with international partners to reduce unlawful migration and end the exploitation of children by smugglers and cartels, and then they would have had the opportunity to participate in an unmoderated question and answer session."

In his planned remarks, released publicly Monday afternoon, McAleenan made a thorough defense of the Trump administration's response to the humanitarian crisis at the southern border which critics say he caused.

"Despite the obvious dangers of the journey, smugglers have adapted their craft to exploit the weaknesses in our immigration system. Their operations are highly sophisticated-with calculated planning on when and where to cross our borders," he said in his prepared remarks.

"With the overwhelming number of arrivals, DHS facilities at the border were overcrowded, resulting in very difficult humanitarian conditions. In some sectors, 50% of our agents were redirected to processing and care for migrants, leaving key areas of the border undermanned and necessitating the closing of checkpoints," McAleenan planed to say.