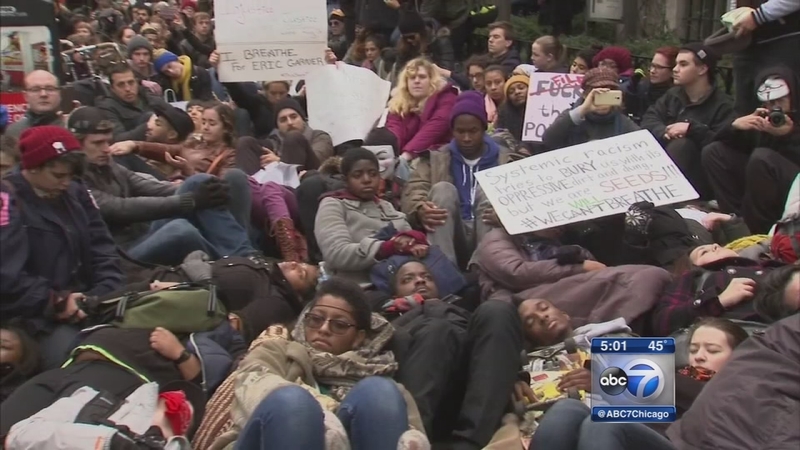 CHICAGO (WLS) -- Thousands of protesters gathered in Chicago and cities across the nation as demonstrations continue to respond to grand jury decisions not to indict white police officers in the deaths of two black men.

Saturday's "Justice for All" marches were put together by civil rights organizations to bring attention to Michael Brown and Eric Garner's deaths and to call for legislative action.

The protests in Chicago continued all Saturday afternoon along the Magnificent Mile. Some arrests were made as demonstrators chanted "Hands up, don't shoot" and "Black lives matter" in front of tens of thousands of holiday shoppers drawn out on a mild weather day.

A few hundred people were part of the protests and are asking others to join in to draw attention to the deaths of unarmed black men at the hands of police.

At one point, protesters got down on the sidewalk, shutting a portion of it down on the corner of Michigan Avenue and Chestnut. They joined what's being called a day of resistance.

"Everyone should be out here because we need to wake up," said protester Christopher Audain. "We need to do something if we want to live in a better America. We gotta do something, we gotta wake up, and that's why I'm out here protesting today because I woke up."

Dozens of Chicago Police officers have been keeping a close eye on the moving protests, watching over the crowds on bikes and Segways.

At least six people were taken into custody in front of Mag Mile's Nordstrom store, as several officers rushed into the crowd and a brief confrontation took place. It appeared as if some of the protesters tried to go inside the store.

It is unclear how much longer the protests will continue into Saturday night, but many of the of protesters plan to go over to Police District at Belmont and Western, where some of the people who were arrested were taken in to be booked to provide support.