Volunteer parents will be in the hallways at Proviso East, West and Math and Science Academy
WLS
By Diane Pathieu and Karen Jordan 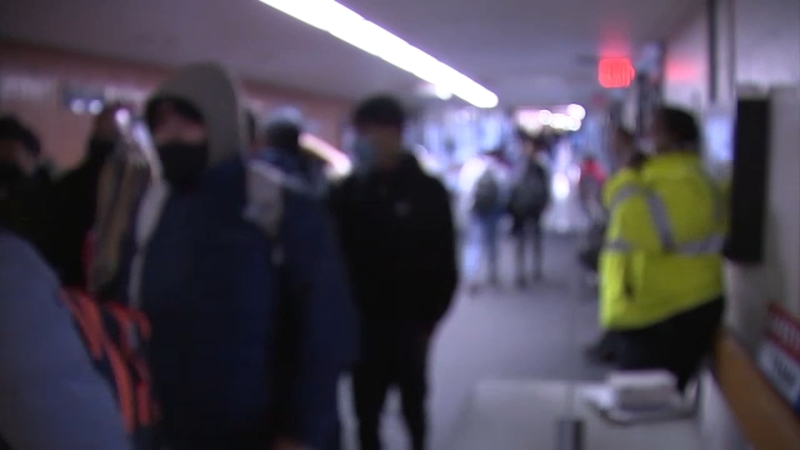 HILLSIDE, Ill. (WLS) -- Parents are taking safety matters into their own hands at the Proviso Township High Schools District 209 in the western suburbs.

Parents on Patrol is a new initiative, with about 52 parents set to patrol the hallways at Proviso East, West and Math and Science Academy to help keep the peace in the hallways.

"There was no fight today. It kind of made a difference," said student, Edwardo Rodriguez.
It's back to class for about 5,600 students across the Proviso School District, but coming back hasn't been easy for everyone.

"It's been sometimes a little stressful [and] confusing because of the transition; rolling out of bed and turning on your computer to going actually going into school," said Proviso West sophomore Andrew Tolefree.

Fights have been breaking out and stressed out students have been acting out, so in order to keep the peace, the superintendent came up with an idea to get to the root of the problem.

"A lot of them are stuff that happens outside of schools, there's stuff that's happening inside of school. Everybody wants to be tough," said fellow student, Aaliyah Wint.

"This is not just about fighting," said Proviso Schools Superintendent James Henderson. "We want to unearth and find out what's really happening."

He initiated a crisis intervention plan providing assemblies every week for students to talk, creating calming rooms, and even providing mental health professionals for kids to talk to.

"We're aware that students, in this pandemic, are going through a lot so this is an awesome opportunity to partner with us and provide that support that we do need," said Dr. Albert Brass, Jr., principal at Proviso West High School.

Plus, 52 parent volunteers will spend each school day roaming the halls, having conversations with kids, getting to know them, and help put them at ease.
"I hope that they can come to any parent if there is something going on even if it's just an ear to lend or just needing that extra voice right there, I think that will be helpful," said parent Laura Velazquez.

The idea is to help with some anxiety and mental health issues that have come up during the pandemic and are spilling over into this school year.

"What was interesting, is that you saw students walking up to their parents, introducing themselves and saying, 'Thank you, we're glad you're here -14:1,'" Bass said.

The hope is to create a sense of calm and normalcy at a time when things are still very uneasy.

"It's been a struggle because you are so used to being in the house, not really interacting with people all the time and especially with work, I feel like a lot of people have to catch up and really have to get their work done to survive this school year," said Proviso West junior Mia Bahena.

Proviso said they are still looking for parent volunteers to help with their program.

"To really be involved, they've got to get in the community and get these parents involved," said parent, Charles Richardson.