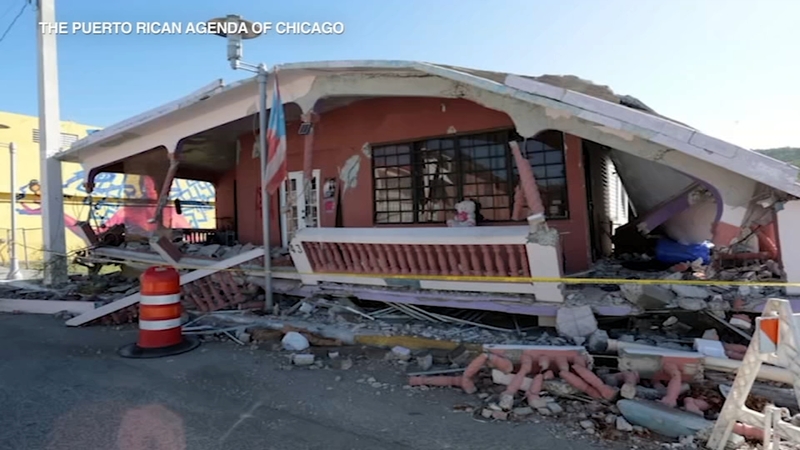 CHICAGO (WLS) -- Puerto Rico has been hit with a series of earthquakes that have left thousands of people homeless and in the dark.

For Jessie Fuentes, and thousands of others in Chicago, the ongoing humanitarian crisis in Puerto Rico is personal. You can hear it in her voice.

"I'm Puerto Rican," said Jessie Fuentes, of the Puerto Rican Agenda of Chicago. "I have family that live in Puerto Rico."

Devastated first by Hurricane Maria and most recently by a 6.4 magnitude earthquake in early January, the island has struggled to get back up on its feet. Hampered by a lack of federal aid, that's why grassroots efforts to help people on the ground have taken on such importance. Fuentes was part of a delegation that recently came back from a five-day trip to Puerto Rico, distributing over $30,000 in funds.

According to FEMA, only $15 billion of the nearly $45 billion allocated to Puerto Rico disaster relief has been allocated. Following last month's earthquake, the House of Representatives passed an additional emergency aid bill that White House has already said it will veto, saying on February 7: "Neither Puerto Ricans nor the American taxpayers benefit when emergency aid is misallocated, lost, or stolen through waste, fraud, and abuse."

"We have a responsibility to Puerto Rico," said State Rep. Delia Ramirez, who represents the 4th District of Illinois. "How criminal if feels for us. An island that has been colonized by the United States, receiving little to no support and left abandoned."

According to the last census, more than 100,000 people of Puerto Rican descent live in Chicago. That's close to 4% of the city's total population, and why there are so many people here that have such a deep interest in what happens on the island and are continuing to raise awareness and funds wherever they can.
Report a correction or typo
Related topics:
chicagohumboldt parkearthquakehurricane mariau.s. & worldpuerto rico
Copyright © 2022 WLS-TV. All Rights Reserved.
TOP STORIES
Death toll rises to 22, mostly children, in TX school shooting
Uvalde school shooting: What we know about 19 kids, teacher killed
Father of Texas yoga instructor accused in cyclist's murder speaks out
Gary teen killed in shooting identified by family
Woman shot near CTA Red Line stop on South Side
Biden says 'we have to act' after Texas school shooting
Chicago expected to move to 'high' COVID level by Friday, Arwady says
Show More
1 killed in 10-vehicle crash on I-294 in Glenview
Long COVID symptoms mainly affect women in their 40s, study finds
Watch Steve Kerr's raw, emotional plea after Texas shooting
How to talk to kids about Texas school shooting
Illinois leaders call for gun control after deadly school shooting
More TOP STORIES News