VIDEO: Firefighter proposes to teacher girlfriend at her school 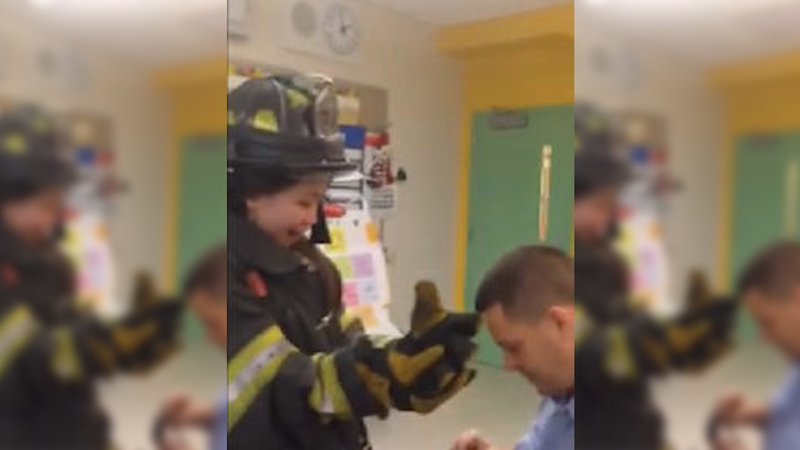 NEW YORK -- An FDNY firefighter's sweet proposal to his teacher girlfriend was caught on camera during a fire safety lesson at the Queens school where she works, and it has since gone viral.

It was the internet that brought Lieutenant David Royael and Natalie Moy together, with the couple having met on Match.com two years ago. And now, it has made them famous.

And so Royael, of Engine 243 in Brooklyn, got down on one knee on December 23 at PS 361 in Woodside, on the last day of school before Christmas break.

He first dressed his now-fiancee, kindergarten teacher Natalie Moy, in his oversized bunker gear while the students laughed at the sight. But he had secretly hidden the ring box in one of the gloves.

"He asked the students, 'Who would like to see Ms. Moy dress up,'" she said. "And of course all the kids wanted that."

But to his nervous surprise, Moy didn't respond when she slipped on the glove. So Royael had to give her a little prompting.

"I did feel something, but I don't know," she said. "I thought it was a device, part of the glove."

When she took the glove off and the box fell into her hand, Royael dropped to the ground and popped the question.

Moy, who has been a teacher for 14 years, and Royael, a 13-year veteran of the department, had initially intended on sharing the video only with family and friends.

"It said it was too big to send, so I couldn't email and I couldn't text it," Royael said. "So my brother said, 'Hey, why don't you put it on YouTube?'"

The video has now been watched by tens of thousands of people all over the globe.