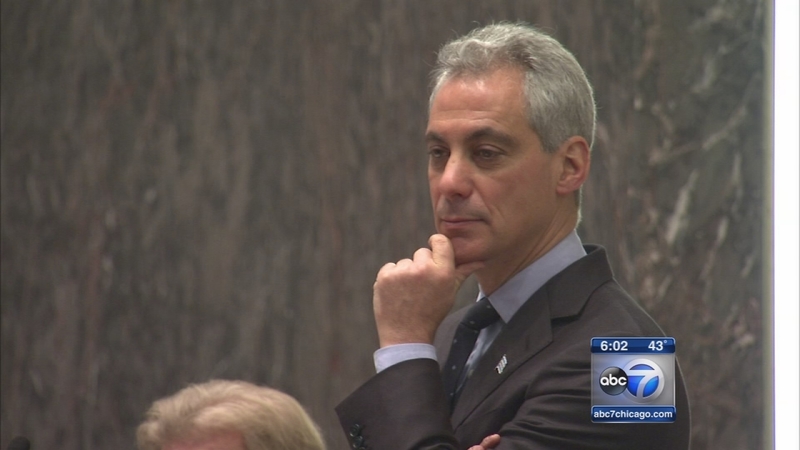 Poll: Emanuel's support has sunk to lowest point ever

CHICAGO (WLS) -- A new poll suggests that Mayor Rahm Emanuel's support is falling sharply following the release of two police shooting videos and a federal investigation of the police department. Many critics say Emanuel has lost his credibility with the public and at City Hall.

On Wednesday morning, Emanuel will address the Chicago City Council as he tries to rebuild his political standing that a new poll says has sunk to its lowest point ever.

The aldermen ABC7 talked to agreed that when the council reconvenes, it will hear from a mayor weakened by a credibility crisis.

"I would think that he has been weakened by this. Is it something that makes him a lame duck? I would say no, but has he been weakened? Of course," said Ald. Jason Ervin, 28th Ward.

"People are going to be skeptical because they've been told one thing and they've seen nothing happen," said Ald. Leslie Hairston, 5th Ward.

A survey of 739 likely Chicago voters commissioned by the online Illinois Observer found Rahm Emanuel's job approval at only 18 percent, with a disapproval rating of 67 percent. Slightly more than half those polled thought the mayor should resign, and nearly 64 percent said they thought Emanuel lied when he said he did not see the Laquan McDonald video during settlement negotiations last spring.

"And that really goes right to the heart of his credibility. They don't believe what the man says," said David Ormsby, Illinois Observer.

"For him to say he hasn't seen the video until now, I question his leadership," said Ald. Milly Santiago, 31st Ward.

"I'm supportive of the process that city council is governed by," Harris said.

Add the police misconduct scandal to the largest property tax increase in city history, a looming teacher's strike at a virtually bankrupt CPS where the convicted former CEO faces a federal prison sentence. Rahm Emanuel is a far cry from the second term mayor he promised he would be.

"You go back to the reelection and warm and fuzzy and I'm gonna be different and it hasn't been that way," Hairston said.

Ormsby noted the mayor's numbers were already falling because of the Barbara Byrd-Bennett scandal and the property tax increase.