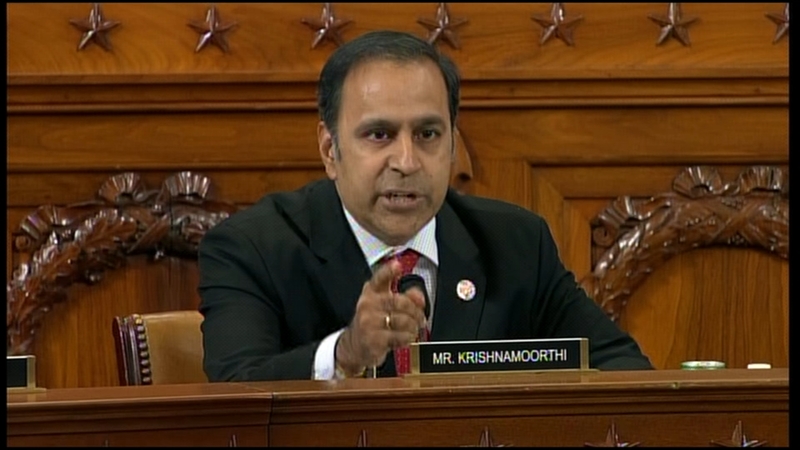 A suburban congressman was the last at bat for the second day of the House impeachment hearings on Friday.

The sole witness at Friday's House Intelligence Committee hearing was the defrocked U.S. Ukraine Ambassador Marie Yovanovitch - stripped of her position last spring by the president.

Ambassador Yovanovich was summarily called home from Kiev last spring, a move that included President Trump's Twitter dressing down that she was "bad news" and that she was "going to go through some things."

To which she replied, "Yeah."

Krishnamoorthi: "Isn't a feature of authoritarianism for the rulers there to claim absolute rights?"

Krishnamoorthi: "And is it a hallmark of authoritarianism for those rulers to smear their opponents?"

After the hearing, Congressman Krishnamoorthi spoke with ABC7's I-Team.

"When the president tweeted at her at 10:00 in the morning, basically what appeared to be an attempt to intimidate her, I also thought that that was a sign her testimony really got under his skin," Krishnamoorthi said.

Trump said, "In the history of our country, there has never been a disgrace like what's going on right now. So you know what? I will I have the right to speak. I have freedom of speech just as other people do. But they've taken away the Republicans rights."

"When you smear political opponents when you allow corrupt interests to hijack foreign policy and when you claim absolute rights -- the absolute right to fire anyone in government, those are features of authoritarian regimes," Krishnamoorthi said. "We are not an authoritarian dictatorship. We are a democracy. So I think the president should act accordingly."

Under questioning from the other Chicago area congressman on the panel, Democrat Mike Quigley, Yovanovitch described how she was asked to put out positive statements about President Trump.