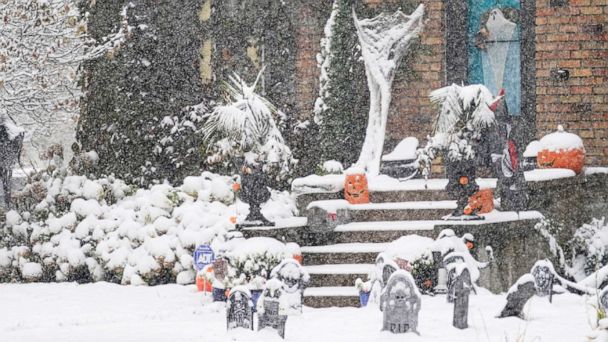 A record-breaking snowstorm has hit the upper Midwest with some areas getting more than 10 inches of snow.

In Minneapolis, 7.9 inches of snow fell yesterday making it the biggest snowstorm in recorded history there this early in the season.


In Eau Claire, Wisconsin, 6.9 inches of snow fell making it the biggest single day October snowstorm in recorded history there.

Conditions were so slick in Wisconsin yesterday that an airplane skidded off the runway in Mosinee late Tuesday evening.

Tuesday's snowstorm is now done and a new one is already developing in the northern Rockies.

On Wednesday, a Winter Storm Watch and Winter Weather Advisory has been issued from the Rockies into the Great Lakes for as a new snowstorm takes aim at the area again.

The new snowstorm is expected to begin later today in the Rockies and tomorrow for the upper Midwest and snowfall totals could reach up to a foot in some areas.


Meanwhile, Red Flag Warnings have been issued from California to Colorado as gusty winds are expected for the region over the next few days.

Elsewhere, Hurricane Epsilon is lingering southeast of Bermuda with winds of 85 mph and a Tropical Storm Watch has been issued for the tiny island nation.

Epsilon is forecast to move east of Bermuda, only bringing gusty winds and some rain to the island with no major impacts expected and no direct threat to the U.S.
Report a correction or typo
Related topics:
abc newsnational
Copyright © 2020 ABC News Internet Ventures.
More Videos
From CNN Newsource affiliates
TOP STORIES